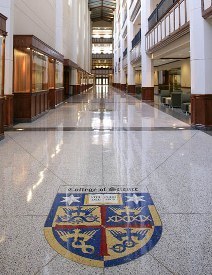 One of the most stunning aspects of the Jordan Hall of Science is the Main Hall, which stretches the length of the building. Whether they enter at the north end or the south end of the building, visitors are treated to a breathtaking view of the interior, enhanced by the natural light shining through the 26-foot high windows that line the eastern wall. Medallions representing physics, chemistry, and biology are embedded in the terrazzo floor along with the planets of the solar system in orbit. The configuration of the planets in orbit aligns with the date the ground was broken–October 13, 2003.

Inlaid in the floor are three medallions that represent the three areas of science that inhabit the building—physics, biology, and chemistry and biochemistry. 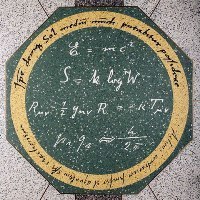 The physics medallion highlights six revolutionary formulas that have laid the foundations of physics. Each forever changed man’s perception of the universe. Displayed in the author’s own writing, they are as follows: Nicolas Copernicus’ heliocentric model of our solar system, Isaac Newton’s law of action and reaction, Albert Einstein’s special theory of relativity, Max Planck’s principle of entropy and density of states, Einstein’s general theory of relativity, and Werner Heisenberg’s uncertainty principle. 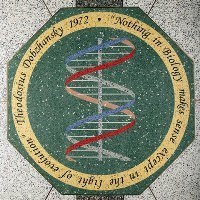 Central to the biology medallion is the quote “Nothing in Biology makes sense except in the light of evolution” from Theodosius Dobzhansky (1900-1975), one of the most respected biologists of the 20th century. Described as "the greatest evolutionary geneticist of our times," Dobzhansky worked extensively on the population ecology and evolutionary genetics of drosophila species, also known as the fruit fly. 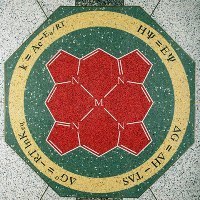 The chemistry and biochemistry medallion displays a porphine molecule at the center of the Department of Chemistry and Biochemistry seal. Derivatives of porphine are important in all branches of chemistry, as it is essential for the blood protein hemoglobin, and for chlorophyll in plants, and is also a primary molecule in many useful catalysts.