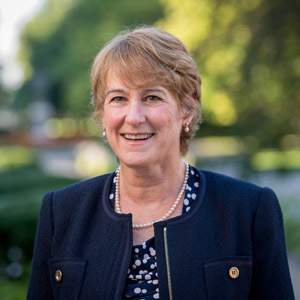 Mary Galvin joined the College of Science as the William K. Warren Foundation Dean in August 2015. As dean, Mary leads and inspires more than 550 faculty, staff, and postdoctoral researchers in the college, which is home to more than 1680 undergraduate and 450 graduate students.

Mary earned her bachelor’s degree in chemistry at Manhattanville College and her master’s and doctoral degrees in polymers and materials science from the Massachusetts Institute of Technology.

Prior to coming to Notre Dame, Mary had experience in the government, industry and academia.  She served as director for the Division of Materials Research in the National Science Foundation (NSF) where she managed a $307M budget and was responsible for setting scientific priorities for materials and condensed matter physics.  In 2005, Mary joined Air Products and Chemicals Inc., serving as technical lead for the development of new electroactive organic products and later becoming a member of the Technology Leadership Team.

After graduating from MIT, Mary worked at Bell Laboratories, where she served for 14 years and became a distinguished member of the technical staff. In 1998, Mary joined the University of Delaware as a professor of materials science and engineering and in 2004 was promoted to distinguished professor. At both Bell Labs and the University of Delaware, Mary established research programs on the structure and property relationships that govern the performance of organic materials in light-emitting diodes (LEDs), photovoltaic cells and thin film transistors. She has co-authored many publications in this area as well as on inorganic/organic nanocomposites and polymer blends, and has given numerous invited talks at national and international meetings. She currently holds five U.S. patents.

Mary is a fellow in the American Physical Society, was elected to the board of directors of the Materials Research Society and has served on National Research Council panels, including the Board of Chemical Science and Technology.