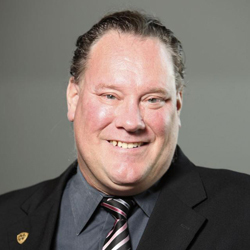 John E. Macor, Ph.D., earned his B.S. degree summa cum laude from the University of Notre Dame in 1982 and his Ph.D. degree in organic chemistry at Princeton University in 1986. Macor’s career has spanned four decades and three pharmaceutical companies with significant contributions in each of them. He began his career at Pfizer in 1986, where he was engaged in a variety of CNS drug discovery efforts, moved to Astra Arcus in 1994 focusing on cholinergic drug discovery, and then moved to Bristol-Myers Squibb in 1997, starting in cardiovascular and moving to neuroscience in 2001, and then immunosciences in 2013. He assumed the role as executive director of neuroscience discovery chemistry in 2002, and most recently, he was appointed executive director of immunosciences discovery chemistry in 2013. At present he is the inventor or co-inventor of one marketed drug (Relpax®) and a number of other compounds presently in clinical trials.

Macor has authored or co-authored over 165 peer-reviewed publications, is an inventor on more than 100 granted US patents, given more than 90 invited lectures, and has over 430 journal publications, US Patents, and meeting presentations. His contributions in the syntheses of heterocyclic compounds, intramolecular 1,2,4-triazine Diels-Alder reactions, indole chemistry, and conformation restriction using heterocycles as bioisosteres in medicinal chemistry are widely cited in the literature. He has participated in and led teams in cardiovascular, metabolic, neuroscience, and inflammation projects, indicative of broad expertise, creativity and impact in medicinal chemistry and drug discovery. Macor chaired the 2002 Gordon Research Conference on Medicinal Chemistry and the 2006 Gordon Research Conference on Heterocyclic Compounds. He served as editor-in-chief of Annual Reports in Medicinal Chemistry for Volumes 42–46 (2006–2011).