Stephanie Morrison, a 2007 physics Ph.D. alumna, has been active in the Montana alumni community after graduation. In addition to alumni group leadership and fundraising, she has founded a successful annual outreach event, Chicks in Science, for grade- and middle-school-aged girls. 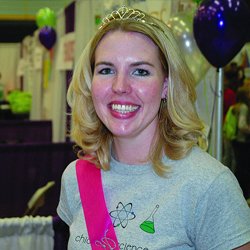 Morrison had the idea for Chicks in Science during graduate school. It was first realized in 2008, and in 2012 she and her fellow volunteers will attend the fifth annual fair in Billings. The event celebrates scientific and mathematical intelligence in women, countering the social pressures and gender expectations that often lead girls of this age to lose their initial enthusiasm for these subjects. Fifty-plus booths draw hundreds of participants into demonstrations, exhibits, and the chance to bond with engaging, interesting female scientists.

Morrison works as a revenue analyst for the Montana Legislative Fiscal Division, forecasting individual income tax revenue and corporation tax revenue for the Legislature; she also analyzes the state's position with respect to its pension systems. She is the secretary and treasurer of the Western Montana Notre Dame Alumni Club, responsible for fundraising for the two Summer Service Learning Project students who come to Montana each year under the club's sponsorship to expand their education by working with and learning from socially marginalized people.