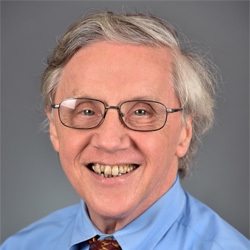 The value of spiritual health

Look at a person with a disability, and it’s often easy to see what makes them different from others.

Dr. David Coulter can see those things in the patients he has worked with for decades. But he also sees one thing that makes them, and all humans, the same—their spirits.

Coulter says recognizing that is a lesson he got from Notre Dame, where 50 years ago he explored what it meant to be human and to be himself. He learned it through reflection, many caring mentors and the opportunity to take classes in a wide variety of fields, sometimes auditing classes in which he wasn’t able to enroll.

Following his passion for all things tied to nature, Coulter earned a bachelor’s degree in biology in 1969. But he could also be found bouncing questions off professors and priests when he sat in on philosophy and theology courses.

He toyed with ideas of becoming an entomologist or biologist, but decided to pursue medicine, earning his MD from Yale with a focus on neurophysiology. Since then, Coulter has worked to unravel the mysteries of the brain, especially the processes that lead to developmental disabilities.

That path has taken him to psychiatric hospitals and neurology departments from Wayne County General Hospital to the University of Texas, Boston City Hospital and the Boston University School of Medicine. He is now a professor of neurology at Harvard University and a senior staff neurologist at Boston Children’s Hospital.

Throughout his prestigious career, Coulter has held tightly to his belief that spirituality doesn’t have to be separate from science. “People define religion as whatever is left over after science is done. I don’t like that,” Coulter says. “Science is a game we play. And we play it well.”

But treating a person’s physical ailments is only part of what they need to heal.

“I’ve spent my whole life trying to advocate for people with disabilities. God doesn’t care how smart you are. He doesn’t care whether you walk or talk. God loves a child with Down Syndrome as much as God loves the pope,” he says. “There is a value in spiritual health. I try to teach that to my students, share that with my residents and share that with my patients and their families.”

He’s also shared his love of nature and spiritualism through poetry, having had a few poems published in recent years. Coulter believes nature is God presenting himself to the world, and he hasn’t been able to get enough of it, from understanding the inner workings of the brain, all the way back to his time digging worms as a 20-something-year-old student at Notre Dame.

“I wrote once that a lot of people when they pray, they bow their heads, kneel and close their eyes,” Coulter says. “When I pray, I throw my head back, throw my arms up and look up at the sky. I say, this is it. This is nature. This is what God created.”