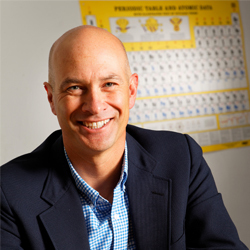 Mark Kozak counts helicopter ski guide, avalanche forecaster, executive director of a science research center, and start-up entrepreneur among the various titles he has amassed over the course his career, since graduating from Notre Dame in 1993 with a B.S. in environmental science. “There is a perception,” he said, “that when you leave college you have this one career, but you don’t [necessarily have to have just one].” He added, “While you want to be an expert in one thing, it is possible to take your skills and experience and apply them to other things and another career.”

Kozak’s desire for a “rigorous science education” brought him to Notre Dame, along with the influence of his father and sister, who studied science and economics here, respectively. Reminiscing about his time here, he explained, laughing, that he changed his major six times in his freshman year. Eventually ruling out engineering, architecture, mathematics, and biology pre-med, he ultimately determined that his interests laid in environmental sciences. In hindsight, this is perhaps unsurprising; Kozak confesses to always being “drawn to mountains and oceans” and fascinated by natural forces, due to growing up on Maine’s scenic Mount Desert Island, where he lived across the street from the Acadia National Park headquarters. The only problem was that an environmental science major did not yet exist at Notre Dame. “All the necessary courses were there, but there wasn’t a formal major,” Kozak explained. So he put together a curriculum for his own course of study in environmental science, and four years later the environmental science major was officially announced.

Upon graduating, Kozak decided to “take a break.” Being an avid skier, he moved to Jackson Hole, Wyoming with the intention of enjoying the slopes and becoming a ski-guide. There, his fascination with snow piqued, and he went on to receive a master’s degree in watershed science from Colorado State University, where his research focused on the variability in snow layer hardness. He then worked as an avalanche forecaster in Wyoming and helicopter ski guide in Alaska.

Yet, Kozak also professes a lifelong passion for business. Being particularly “inclined towards start-ups,” he subsequently spent a decade building companies and organizations, forging a successful career in the corporate world.

Known for its community-oriented Town Talks in which leading researchers give engaging, down-to-earth public lectures on matters of scientific importance. TSRC also regularly hosts small conferences. The center invites “the world’s most influential academic and private sector molecular scientists to set powerful, new directions in research, build international collaborations, and find solutions to challenges in science and engineering.” In June 2016, a conference organized by Dan Gezelter, professor of chemistry and biochemistry and director of undergraduate studies in the Department of Chemistry and Biochemistry at Notre Dame, brought theoretical, computational, and experimental researchers from across science and engineering together at TSRC to discuss thermal transport at the nanoscale.

Kozak credits Notre Dame for giving him a “great education,” and with three children of his own who are already showing an interest in science, it is possible that more generations of the Kozak family will walk the corridors of the Jordan Hall of Science in the near future.