ACMS and athletics collaboration benefits students in sports and science 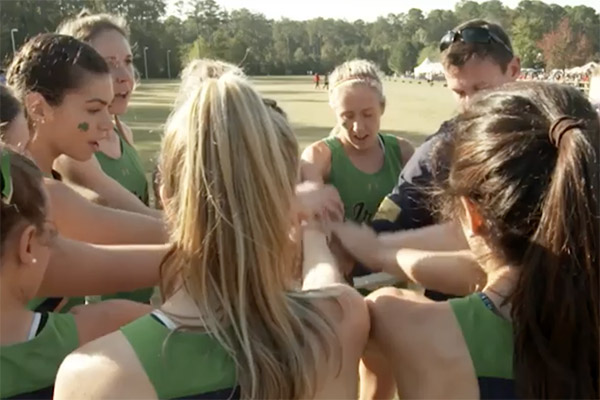 To someone who’s not into math, the formula statistician Alan Huebner chalked on the blackboard in Hurley Hall could have looked like the formula to…well, anything.

But there’s a clue in the graph he drew adjacent to it, with “performance” labeled on the Y axis and “day” on the X. Data from an athlete’s training schedule –whether for running or weightlifting – can be added to the formula, then plotted on a graph. The result can show an athlete when to begin to taper down before a race or competition.

Yes, of course there’s math for that.

Student athletes at Notre Dame have been training for peak performance since the days of Knute Rockne. And now, the University’s 750 athletes have the backing of technology and data science, thanks to a recently established endowment that pays the salaries for two ACMS students who develop real-world experience while giving coaches and athletes concrete tools that will aid in their training.

“The information we collect will help across the board in enhancing student athlete performance and well-being, including identifying individuals at risk of injury” -Alan Huebner, associate professor of ACMS

The Mastrovich Endowment for Excellence for Sports Science funds a collaboration between Huebner, associate teaching professor in the Department of Applied and Computational Mathematics and Statistics (ACMS), and Jordan Webb, head of sports science and associate strength and conditioning coach for the Department of Athletics.

“The information we collect will help across the board in enhancing student athlete performance and well-being, including identifying individuals at risk of injury,” Huebner said. “This is not just a one-off, one-time analysis. Jordan and the team are building infrastructure to store and collect the data so that results can be obtained very quickly and easily and be used by coaches to have insight into practice, training, games, and recruiting.”

Myriad fields of data have been collected through the years from the University’s sports fields. Statistics from games. Meets. Matches. Practices. Training sessions. But the information was stored in different formats in different locations. Choi and Dominic Angelotti, a senior ACMS major, started tackling the tangle of statistics during summer 2017 by setting up a database and building an app using open-source data science software. Their work “cleans” the data by organizing them into correct columns and assuring accuracy.

Current technology has added to the treasure trove of statistics as well. New data have been gleaned from on-body GPS harnesses, a 3-D motion capture system in the training room, and from platforms that measure ground forces when athletes move across them. Also, student athletes in several sports fill out daily surveys through a phone app and complete surveys about how long they sleep, their academic workload, and stress levels.

“We want to know how (athletes) perform on a daily basis; academics as well,” Webb said. “We want to make sure we provide a positive experience at Notre Dame, whatever that may be for that player.”

During August 2017, the University’s student athletes funneled into the Edmund P. Joyce Center, where they were photographed by a bevy of cameras surrounding them as they jumped, stretched, and twisted in front of green screens. Webb and other coaches called out specific moves: “Jump as high as you can! Put your arms above your head and extend them back as far as they’ll go! Now jump off the box into a squat!”

The system captured the biomechanics of the athletes’ movements, displaying simple animations on computer screens along with data recorded from the angles, speed and forces they generated. The information can spotlight any deficiencies that could impact the athlete’s performance.

After “cleaning” all the data through software and presenting the statistics in a visual format like a chart or bar graph, the information is vastly more accessible to non-statisticians than a mish-mash of numbers can ever be, Angelotti described. 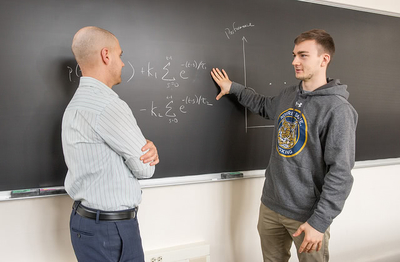 “Honestly, I wasn’t really sure what we were doing,” said Anna Rohrer, a junior neuroscience and behavior major and a track/cross country athlete, reflecting on the first time her movements were analyzed by the system. Rohrer, who said she’s fascinated with the workings of the human body, was pleased to learn the results from the motion capture would be used to guide her team’s strength and conditioning regimen.

“Distance runners tend to be very weak in the hips and glutes, and if you don’t strengthen your small weaknesses, then over time they add up to big things, and that’s how you get hurt,” she said. After noticing that the entire team had these deficiencies, Kyle Kelly, the strength and conditioning coach for track and cross country, incorporated new exercises with mini bands and squats into their training programs. The new approach not only helps strengthen and warm up those muscles, but also trains them to fire when needed.

And if athletes don’t use the correct muscles for a specific move, the wrong muscles compensate, which can lead to injury. That’s potentially why soccer player Thomas Ueland, a senior majoring in biological sciences who plans to attend medical school, pulled his hamstring during the spring of his sophomore year.

Statistics recorded during his motion-capture session, as well other information recorded when he used other equipment that measure forces and muscular strength symmetry, showed that he uses his quadriceps more than his hamstrings. This likely led to a pulled hamstring during the spring of his sophomore year.

“Because of that, I’ve been working a lot more on strengthening those areas,” he said. “I like that the information we get now is highly individualized, and it’s not just about strength or whether you can jump higher. It’s leading to training that keeps you on the field.”

After games, he and his 27 other teammates receive an interactive report with information downloaded from their wearable performance tracking devices. The reports show the number and intensity of miles they’ve run, as well as their top speeds. With the help of the analytics team, this data is compiled into an aggregate number representing the acute and chronic physical stresses on the athlete. If the accumulation of the recent training and games show the athletes are fatigued, Webb approaches the team’s other coaches with recommendations for modified training the next day.

Though Ueland said his teammates don’t use the bar graphs to shame each other, a high aggregate number generates an expected response.

“We get really excited when we get over 30, so if you get over 30…you brag to everyone else,” he said, and laughed.

For student athletes who have grown up with technology, a visual representation of their statistics is almost expected. “It’s easier than a long list of outputs, not only to the student athlete but also the coaches as well – here’s a graph, where you can see what the norm is for the team. You can see who isn’t meeting the norm and then figure out what to do going forward,” Angelotti said.

For him and Choi, however, the experience to work on sports statistics has had its own rewards. Huebner had been working with some community organizations to find real-world data for his students to use because having raw data is crucial as students move from the classroom to real-world jobs or graduate school.

“I can take a class and we do problem sets where we test sample data sets, but you know you’re going to get nice outputs,” Angelotti described. “With this data from athletics, I have to see how I can fit in things that aren’t going to be laid out nice and pretty for the task that I want to do.”

"A big way people fall in love with statistics is through sports." -Jaihee Choi, ACMS student

The variety of work has been exciting as well, Choi noted. During summer 2017, she was tasked with analyzing the relationship between sleep and muscle soreness for Notre Dame’s hockey team. “We had the data, ran some analyses, created visuals, and then we presented what we were able to find or not find,” she said.

And while looking at a chart for one lacrosse player, Choi was struck with one eye-opening moment: Data plainly showed the player had made a curious switch from her right leg to her left during one test. “And that was the week she tore her (anterior cruciate ligament)…it was interesting to see that in the data,” Choi said.

Her observation spotlights one goal for the collaboration, which is to use the data to eventually predict a possible injury, so it can be avoided. That, however, is a complex project with many variables that need to be addressed before any type of accurate predictions can be made, Angelotti said.

Though the collaborative program is in the early stages, those on both the athletics and the science side of the program shared how valuable it’s been to work together.

“It’s like the Campus Crossroads project, with the new buildings being attached to the stadium; the University is trying to branch out and bring everyone together—the sports and the academics—to merge that gap,” Rohrer said.

Though Choi decided to work for the collaboration primarily because of her love for statistics, assisting the athletes has been a fun part of the process for both her and Angelotti. Choi remembers being mildly star-struck when she saw Notre Dame Head Football Coach Brian Kelly in the Guglielmino Athletics Complex while she was working. “Jordan (Webb) told me not to be weird!” she joked. 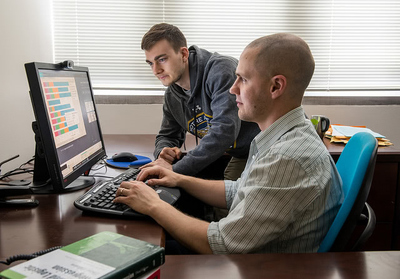 The skills she’s learned have changed the direction of her interests as well. Previously Choi planned to study statistics in relation to economics policy or education, but now she’s leaning toward machine learning and applied math. And Angelotti said the skills he learned, particularly with the computer language SQL, helped make his resume stand above the rest. Though he will pursue his master’s in ACMS in the fall, he has already committed to work for Booz Allen Hamilton as a senior data scientist consultant upon completion of that degree.

“I’ve learned lots of things that you don’t necessarily learn directly as an ACMS student. As a student you learn lots of programming and things like that, but there’s definitely things you don’t get a lot of practice on unless you are doing outside work on your own,” he said.

Both Rohrer and Ueland agreed that as student athletes studying science, they are perhaps taking away the most from the collaboration. They’re both grateful to the University for combining the latest technologies with sports in order to help them succeed because, “ultimately there are a lot of things you can do when practicing your particular sport, but it’s going to be the little things you can do that can give you an edge over another team,” Rohrer noted.

Although Ueland doesn’t yet know what specialty he’ll practice as a physician, he appreciates the collaboration because it showed how he can merge his passions for academics and sports. “Using data in the future to prevent injuries and maximize recovery and performance was a cool connection I never made before coming to Notre Dame,” he said.