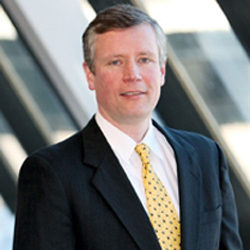 Dr. Connell is honored for his achievements in pharmaceutical research and development as well as his accomplishments as a leader at two of the world’s largest pharmaceutical companies: Bayer and Pfizer.

Advised by Prof. Paul Helquist, Dr. Connell received his Ph.D. in organic chemistry from Notre Dame in 1989—also the year in which he won the Notre Dame Outstanding Graduate Student Award. He then began a two-year National Institutes of Health postdoctoral fellowship at Harvard University under Professor E.J. Corey.

In 1990, Dr. Connell joined the new Bayer Pharmaceutical Research Center in West Haven, Connecticut, where he spent nine years and rose to the position of director of Diabetes and Obesity Chemistry.

Dr. Connell joined Pfizer in 1999 as Director of Cancer Chemistry. He was an inventor on one of the two key patents for the drug now known as Tarceva®, which is has been shown to improve overall survival in advanced non-small cell lung cancer and advanced pancreatic cancer. He then became Pfizer’s Executive Director of Research operations and, next, the Vice President of External Research Solutions Center of Excellence (ERS). In 2011, Dr. Connell moved to Shanghai for a one- year assignment to help Pfizer establish the Anti-infective Research Unit. He returned to the States in early 2012 and continues to lead ERS and manage Pfizer’s network of research partners around the globe.

This lecture is sponsored by the John A Lynch Lecture Series and the Department of Chemistry and Biochemistry.