Kevin Howard, a fifth-year graduate student in the Physics Department, knows one of the secrets of “The Faraday Pickup” – an event at the 11th Annual Physics Olympics at Jordan Hall. He whispered it, but made sure that none of the participants could hear him. 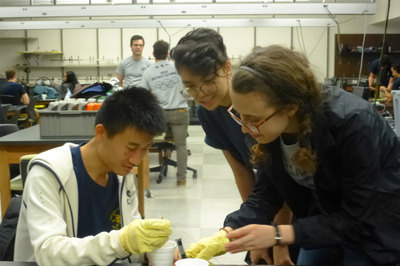 Later during the competition, a student was overheard speculating about using “the secret” but her group did not end up doing it. Howard said he has only seen one or two groups use this technique in the many years he has volunteered and the result is astounding. He was one of six graduate students volunteering at the Olympics.

The Faraday Pickup involves building an electromagnet using only materials supplied – two 1.5-volt batteries, bare wire, a pair of scissors, a container of paper clips, two large nails and a specified length of electrical tape. The participants try and pick up as many paper clips as possible with the magnet and the winning number of paperclips wins. The students get 25 minutes to perform each of the three tasks.

The example illustrates the challenge of the Physics Olympics, which brings together students from the Research Experience for Undergraduates (REU) program from Notre Dame, Purdue University and Michigan State University to collaborate on the projects during the afternoon. Teams competing June 12 were comprised of 52 rising junior and senior students from different universities.

The “Lambda” team of Lexie Weghorn, of Notre Dame, Nicole Schulte, of Germany, and Jasmine Washington of Michigan State picked up only 34 paper clips on their first try, but increased that to 70 on the last attempt of the Faraday challenge, proving the importance of experimentation and using time wisely.

“It is a fun event but also challenges the students to think on their feet, so to speak, to solve three practical physics programs,” said Umesh Garg, professor of physics at Notre Dame, who runs the REU program. “Also, physics is increasingly a collaborative endeavor and we hope to teach them the value of collaboration, since they have to put their heads together to find the best solution.” 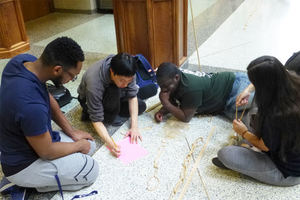 After lunch and before the start of the sessions, students gathered quietly in Jordan 101 waiting for the afternoon to begin. Garg, a popular professor whose ease with the students demonstrated why he was the recipient of the Faculty Award in 2018, put them at ease by his sense of humor, telling them that this year the format would be different and they would be running around campus and jumping hurdles. They laughed and he assured them not to worry, that they would be “true nerds” and would not be doing anything that physical.Garg said the competitors are from the same institutions, but the participants are different each year and “the results are quite different form one year to another.” He said Notre Dame, in its 33rd year of REU, has one of the oldest programs in the country.

While describing the three events, Garg said the Raft in Dire Straits event required designing an aluminum foil raft that could float in water holding the maximum number of bolts. “If you develop a hole in the aluminum foil, you’ve already drowned,” he warned.

During that exercise, students were given only a lengthy of aluminum foil, 10 straws and elastic bands. The first group attempting it sat quietly around the materials, trying to decide how best to proceed. “They don’t know each other,” said Miguel Correa, a physics graduate student helping in that session. “If they pursue a career in science you have to work with others on difficult projects and with difficult people at times,” he said. Correa is one of the volunteers who also participated in an REU program as an undergraduate.

The students came up with surprisingly different methods of making the boat: one used a star shape, another resembled more of a meat loaf pan shape, and another basically designed the boat with the straws as the main component. Time is of the essence as students need to make adjustments in order to see which type of structure holds the most weight.

Jason Prochaska, a rising senior at Notre Dame, thought the project was a lot of fun. “It certainly makes you think on your feet,” he said. His team – Higgs – ended up with 17 bolts in their square-shaped vessel. His team also won the gold medal at the end of the competition.

During the “Bungee Madness” event, students created a bungee cord with elastic bands and a sand bag, throwing it over the third floor of the atrium and calculating the distance so that it would not hit a bucket of water on the first floor, but would reach the height of the top of a step stool. Any attempt in which the bungee cord hit the water resulted in a 15-minute penalty.

Students sat on the floor untangling elastic bands, doing equations on the instruction sheet, and laughed when someone played the end song of “Jeopardy” on a cell phone. “I told you we had to do the math,” said one participant after a practice attempt. Most of the attempts were too short, although one witnessed did hit the water.

During the awards ceremony after, students were much more animated and relaxed, laughing and talking with students from other universities. Garg told the participants that they did really well, at least in comparison to last year.

“I hope you had a chance to enjoy our facility,” said Michael Hildreth, Associate Dean of Research and Graduate Studies, who helped hand out awards, noting that is always a pleasure to have three great universities collaborating.