Last Tuesday, April 3, the Applied Computational Mathematics and Statistics Department sponsored a panel of five recent ACMS graduates to return to campus and pass on advice to current majors. Students had the opportunity to ask questions about what the graduates did on campus, what they wish they would have done, and what the future of an ACMS major really looks like. 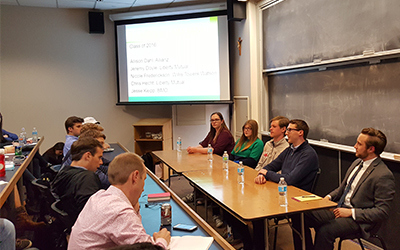 The panelists discussed what they missed most about Notre Dame, interview tips, and pointers for transitioning from college to work life. All five graduates acknowledged the importance of taking classes and having interests outside of their primary fields of study. Doyle noted that his most rewarding college experience was a summer spent teaching math at a nonprofit, and Hecht talked about a fellow actuarial assistant who had studied geology.

When asked for interview advice, the panelists agreed that having these kinds of diverse interests and experiences helped them stand out, adding that interviewers are looking for someone that they themselves would like to work with.

Once the floor opened up, students asked questions about work-life balance, specific types of interview questions, and for recommendations on classes. Dahl said that her job required a fairly strict hours, but the other panelists experienced varying degrees of flexibility with their work schedule. The graduates similarly varied on how often they took their work home with them. All the graduates agreed that work-life balance changes widely depending on the company culture and suggested students ask questions about it in interviews.

The panelists also discussed the best classes they took at Notre Dame. Both Dahl and Frederickson agreed that applied mathematical financial economics was hugely helpful in getting them their current jobs. Doyle made an argument for taking probability, and Hecht maintained the importance of taking occasional classes outside the math and ACMS departments in order to develop other interests.

This event was sponsored by the Delahanty Family Endowment for Excellence in Mathematics, the Department of Applied Computational Mathematics and Statistics, and the Actuarial Club. All five panelists stressed their willingness to talk further with current students willing to reach out over email. Students who have questions about the ACMS major or actuarial minor may also reach out to assistant reaching professor Jeffrey Zheng.