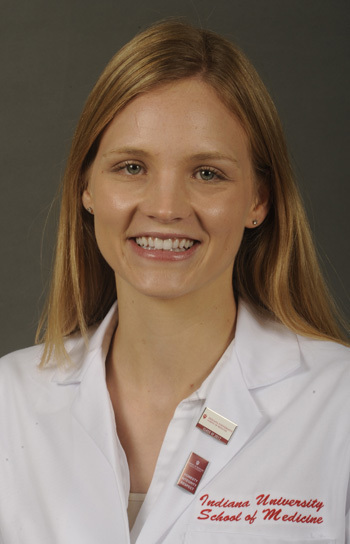 Cancer patients may have had the quality of their treatment altered before it begins, influenced by cancer center advertisements that emphasize fear and hope on television and in popular magazines. That conclusion is demonstrated in a recent study published in “Annals of Internal Medicine” by 2010 College of Science alumna Laura Borgenheimer Vater, now an Indiana University School of Medicine-South Bend student.

Titled, “What Are Cancer Centers Advertising to the Public? A Content Analysis,” the study demonstrates that cancer center marketing drives a demand for therapies such as chemotherapy and radiation by using emotional messaging that is long on happy endings or battle cries, but short on information about the risks and benefits of treatment options, their costs and potential alternatives. The study has attracted attention from CNN, WebMD and Modern Health Care.

Although further research is warranted, the concern is that such advertisements have an adverse impact on a patient’s decision about treatments and may lead to inappropriate demand for services in hopes of a cure that may not be possible, Vater said.

"With these cancer center advertisements, patients are getting the rose colored glasses version: ‘If you come to our center, you’re going to live,’ ” she said.

Vater graduated from Notre Dame in 2010 but waited to enter medical school. Inspired by biology professor Paul Grimstad and philosophy professor Kristin Schrader-Frechette, Vater first leaned toward public health. After a year of teaching high school in Haiti, she enrolled in the University of Pittsburgh Graduate School of Public Health. There, she began to work with Yael Schenker, M.D., of the University of Pittsburgh Medical School Department of Medicine, who was interested in exploring cancer center research.

Vater, Schenker, and a team of researchers analyzed the advertising campaigns of the top 102 cancer centers as recognized by the National Cancer Institute. Among these centers, 85 percent use television advertising; 27 percent place ads in popular magazine. The research team reviewed hundreds of magazine ads and some 1,400 television commercials, ultimately analyzing the content of more than 400 video and print advertisements.

The ads often referenced specific cancer types, played on fears, evoked hope for survival and touted “aggressive treatment.” Communications that should be part of the doctor-patient relationships, like alternatives, costs, realistic outcomes and side effects, are rarely discussed.

Although the team understood that emotional content is at the heart of all marketing, they are concerned that cancer center ads contribute to a known disconnect between patients’ understanding of their disease and treatment, and physicians’ understanding. “Therapeutic misconceptions,” as they are known, are often found at the end of life, when a physician is seeking ways to make a patient comfortable, and the patient is still expecting a cure.

During her master’s program, Vater realized she wanted her work in public health to involve patients. She enrolled in medical school in Fall 2013. She has continued to work on her cancer research during summer break.

In subsequent studies, Vater would like to determine whether and how cancer advertising influences patients, and how much cancer centers are spending on advertising, she said.