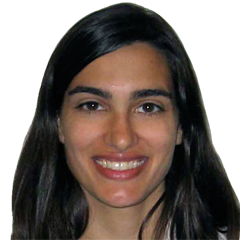 The Department of Mathematics will host Notre Dame alumna Sami Hayes Assaf as the next Math for Everyone Series speaker on Thursday, April 10.  Assaf’s presentation, “Combinatorics and Card Tricks” will take place at 5:00 p.m. in 101 Jordan Hall of Science.

Assaf never realized she would pursue a career in mathematics until she came to Notre Dame. She originally began her undergraduate career as a program of liberal studies major.  The summer before her sophomore year, her friend (and now husband) Sean encouraged her to take a course Linear Algebra. She took the class and realized how much she loved mathematics, so she registered for all of the core sophomore honors mathematics classes the next semester. “After taking classes with Peter Cholak and Frank Connolly my sophomore year, I was so enthralled with the beauty of mathematics that I changed my major,” explained Assaf.  She was admitted into the honors mathematics program her junior year.

"One day during my Linear Algebra class, we discussed the theorem which says that every square matrix is similar to one in Jordan Normal Form," said Peter Cholak, professor of mathematics. "Sami wanted to know the proof in detail, so I gave her another book with the proof.  Every day for a week she came by my office with questions until she understood the proof. I was so impressed with her ability and drive. I enjoy those moments when I can help students lose themselves in the math and there were many such moments with Sami."

In addition to her mathematics courses, Assaf was also a member of the Seminar for Undergraduate Mathematics Research (SUMR), a program for the most gifted mathematics students at Notre Dame who intend to do post-graduate work in the mathematics series.  "Sami Assaf was a brilliant student in the SUMR program from 1998 to 2001," said Frank Connolly, emeritus professor of mathematics. "She had an outstanding work-ethic which has served her well, and a razor sharp intelligence too. She was gifted with a wonderful sense of humor." She graduated from Notre Dame in 2001 with a double major in honors mathematics and philosophy.  She went on to earn her Ph.D. from the University of California Berkeley in 2007.

“I love discovering symmetry in mathematics that no one yet has seen or understood. Solving an unsolved problem is both exhilarating and humbling,” Assaf explained. “It’s exhilarating because I am pushing the limits of human knowledge to include new things. It’s humbling because, invariably when I discovered something new, I realize that there is so much more that I still have to discover.”

Assaf has received many accolades throughout her mathematics career, including a Graduate Research Fellowship and Postdoctoral Research Fellowship from the National Science Foundation, and a National Defense Science and Engineering Graduate Fellowship from the Department of Defense. She is now the Gabilan Assistant Professor of Mathematics at the University of Southern California and her research interests include symmetric function theory, representation theory, and algebraic geometry. Her current research program at USC is focused on developing the theory of dual equivalence graphs, which provide a combinatorial tool for establishing the symmetry and Schur positivity of a function expressed as a sum of quasisymmetric functions.

“There are rare, but beautiful moments when a bright student is in awe of a problem or theorem and then she has a breakthrough and it all makes sense,” said Assaf. “I love helping students to be awed and then to breakthrough that with understanding. These moment of discovery are simply the best.”