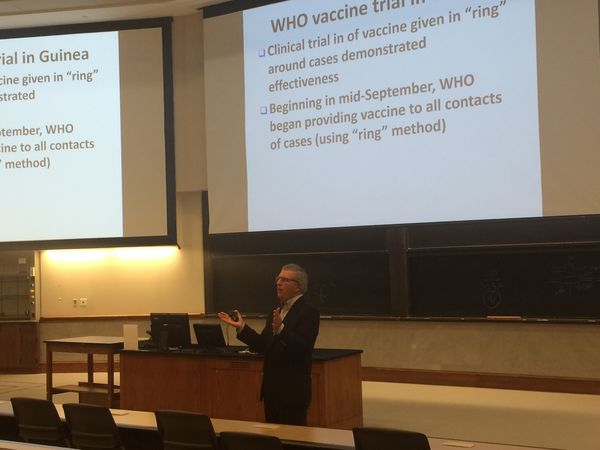 Each year Notre Dame alumni in medicine award stipends to a group of current Notre Dame students or alumni in medical school. Recipients are awarded these stipends to cover funds for international medical missions. This past Saturday (Oct. 19), Paul Lambert ‘12 shared his experience as a volunteer in Tutwiler, Mississippi. Following his presentation, Dr. Fred Angulo from the Centers for Disease Control and Prevention presented on the lingering effects of ebola.

Lambert is currently attending the University of Chicago Pritzker School of Medicine and hopes to graduate next year. A student group at his university called Journees traveled to Tutwiler, Mississippi in December 2014-Jan 2015. Journees is a club at UChicago that aims to expose medical students to the healthcare needs of diverse patient populations beyond that of the University of Chicago Medical Center.

The group wanted to work with community organizations so they chose to engage with Habitat for Humanity. The organization has built over 37 homes in Tutwiler. The group also shadowed in the Tutwiler Clinic which provides a variety of primary care services.

Frederick J. Angulo, DVM PhD is the Associate Director for Science, International Task Force, and focuses on Ebola Emergency Response at the Centers for Disease Control and Prevention. There have been 20 outbreaks of ebola in Africa since 1976. The epidemic can be separated into five stages: start, explosive growth, control, and vigilance.

In all three countries where Ebola spread to, it began in the biggest African cities. CDC’s response consisted of activating the Emergency Operations Center (EOC) on July 9, 2014.

“The largest international response for CDC, with the help of collaborations with a wide range of partners like Doctors Without Borders, consisted of approximately 3,000 deployments. Most of their support is for ministries of health in West African countries,” said Angulo.

The lessons learned from Ebola is that a health threat anywhere is a health threat everywhere. The international health regulations were adopted by all countries in 2005, which is used by countries to prevent and control public health threats. Unfortunately, only ⅓ of the world is prepared to respond. The next steps include getting to zero in 2015, in the next three years CDC will provide technical assistance to 17 countries to achieve IHR compliance through GHS.