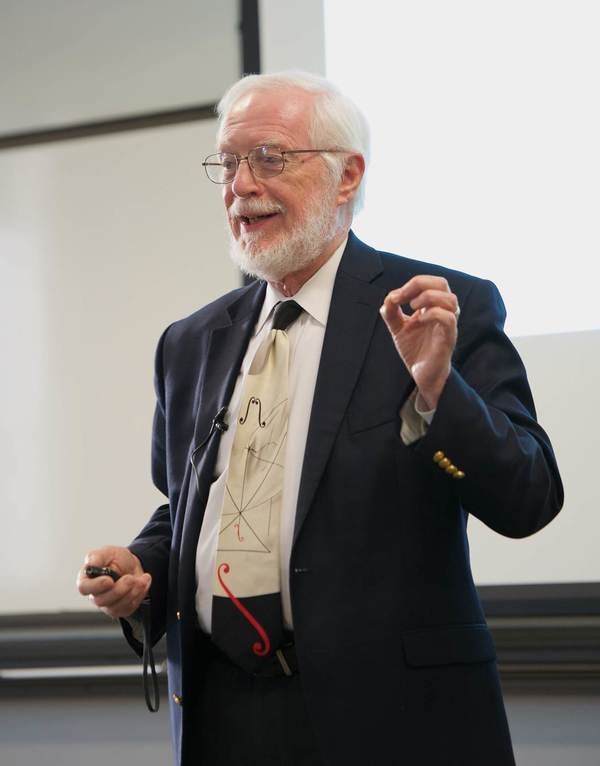 This past Thursday (Oct. 8) at the Math for Everyone lecture series, geometer and emeritus professor at Brown University,Thomas F. Banchoff ND '60, gave a presentation titled “Exploring the Fourth Dimension in Geometry, Literature, and Art.”

In our age of computer visualization, we can now explore phenomena in our "nearest neighbor", the fourth dimension. In his effort to do this, Banchoff includes Edwin Abbott Abbott ("Flatland"), Madeleine L'Engle ("A Wrinkle in Time") and Salvador Dalí ("Corpus Hypercubus") in his presentation.

Banchoff opened his lecture by referencing his work analyzing Edwin Abbott Abbott’s work “Flatland,” a satirical novella written in 1884. Abbott was the first to explore the dynamic between individuals and phenomena from a dimension higher than their own. Banchoff gave an overview of the background and development of the dimensional analogy that led to the creation of Flatland. He then supplemented his explanation with a demonstration of how modern computer graphics is providing new meaning to its enduring message.

The second work that he focused on was Madeline L'Engle's “A Wrinkle in Time,” a book that has gained wide popularity in recent years as a children’s story of good defeating evil. Meg, Charles Wallace, and Calvin are triumphant in the end through strength of will and reasoning and faith in one another. Banchoff explained how the author inserted several spiritual, mathematical, and scientific concepts into her story.

The last work Banchoff referenced was Dalí’s “Corpus Hypercubus” or “The Crucifixion,” an oil-on-canvas painting from 1954. The work shows Jesus on a cross that is actually a polyhedron net of a hypercube, the central figure in the painting. It makes a statement about four-dimensional space and soon it became known by its geometric name. Banchoff explored this relationship between the polyhedral surface and the fold-out model of the hypercube.

Tom Banchoff is a scholar who has earned a world-wide reputation for his remarkable scholarship concerning the Fourth Dimension. He has taught at Brown University since 1967. A couple of his teaching appointments include Harvard University and the University of Amsterdam; he also served as president of the Mathematical Association of America.

Math for Everyone is a series of math-related lectures, especially for undergraduates. The next Math for Everyone lecture will be held on November 12, 2015 in 127 Hayes-Healy Hall at 5:00pm. Everyone, from Fields medalists to math phobes, is welcome to attend