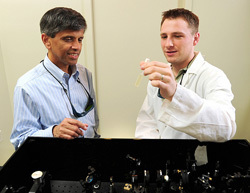 The authors of the most-accessed articles from ACS Nano and Nano Letters in 2010 were each invited to create a video highlighting their work. The following two videos illustrate graduate research by the Kamat group related to energy conversion.

In the perspective video, Prashant Kamat, The Rev. John A. Zahm Professor of Science, and graduate students Ian Lightcap and Kevin Tvrdy discuss how graphene-based assemblies are gaining attention as a viable alternate to boost the efficiency of various catalytic and storage reactions in energy conversion applications. The use of reduced graphene oxide has already proved useful in collecting and transporting charge in photoelectrochemical solar cells, photocatalysis, and electrocatalysis. In many of these applications, the flat carbon serves as a scaffold to anchor metal and semiconductor nanoparticles and assists in promoting selectivity and efficiency of the catalytic process. Covalent and noncovalent interaction with organic molecules is another area that is expected to provide new frontiers in graphene research. Recent advances in manipulating graphene-based, two-dimensional carbon architecture for energy conversion are described.