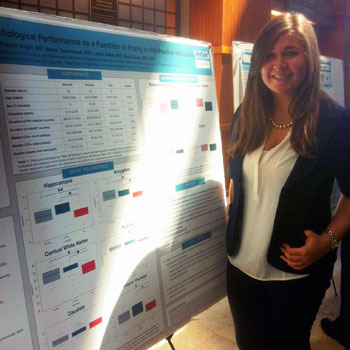 Stephanie Prince, a biochemistry major in the Class of 2016, recently completed 10 weeks of summer research at Washington University Medical School in St. Louis as an Amgen Scholar.

The biopharmaceutical company’s Amgen Foundation granted 340 awards among nearly 5,000 applicants for work at 17 institutions in the United States, Europe and Japan. Twenty-seven of the award recipients spent the summer at Washington University and lived with 20 other students conducting similar research through other programs. The Amgen Scholars also traveled to the firm’s headquarters near UCLA in Los Angeles one weekend and met other program participants from the United States.

Prince has worked in the laboratory of Matthew Leevy at the Notre Dame Integrated Imaging Facility on optical imaging since the end of her first year at Notre Dame. She said that her work with Prof. Leevy prepared her well for her summer at Washington University. In addition to her research in neuroimaging, Prince participated in scientific writing courses, lectures, and a poster presentation at the end of the summer. She was also able to network with other scholars interested in similar pursuits. “It’s getting me really excited for grad school,” Prince said. “We’ll probably see each other eventually.”

Prince plans to pursue a doctoral degree in neuroscience. More than 90 percent of Amgen Scholars since the program started in 2006 are pursuing advanced degrees or careers in science.