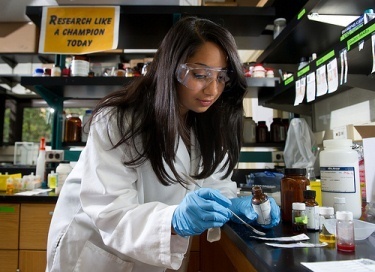 The Department of Chemistry and Biochemistry launched the Nicholas C. Angelotti Undergraduate Research Fund in Analytical Chemistry with a lecture by Tim Angelotti, a researcher and associate professor at the Stanford School of Medicine, followed by a few words from David Angelotti who spoke about his father. The Angelotti family established the Nicholas Angelotti Undergraduate Research Endowment for Excellence in 2005. Earnings for the endowment will support summer studentships, beginning this summer in Professor Marya Lieberman’s laboratory.

Nicholas Angelotti graduated from Notre Dame in 1950 with a bachelor’s degree in chemistry, earned a graduate degree at Case Institute of Technology and worked as an analytical chemist for 42 years at Dow Corning Corporation. Two of his sons, Tim and David, graduated from Notre Dame in 1985–Tim in chemistry and David in engineering.  Tim, who worked as an undergraduate researcher in the laboratory of Anthony Serianni, was published in 1987 in the Journal of the American Chemical Society. He earned a Ph.D. and M.D. at the University of Michigan in 1994.

The lecture, “Molecular Pharmacology: A biochemical analysis of receptor and ion channel function,” described pharmacology as a combination of biochemistry, medicinal chemistry, physiology, neuroscience, molecular biology, genetics and cell biology. “As a pharmacologist, we want to design better drugs with more specificity and less side effects,” he said. Angelotti has done research on the role of alpha 2A and alpha 2C receptors in sympathetic neuron signaling. He is currently doing research on Receptor Expression Enhancing Proteins (REEPs), translating earlier research, on how REEPs guide receptors in yeast, to their function in mammals.

In addition to Tim and David, other family members, including Nicholas Angelotti’s wife, Mary Lou, son Steve and daughter Linda, attended the lecture and reception afterwards which formally launched the fund. Faculty and students met with the Angelotti’s who enjoyed a tour of Marya Lieberman’s lab with Revathi Kollipara, the undergraduate student who will be receiving the inaugural Nicholas C. Angelotti Undergraduate Research award.