Ani Aprahamian, the Frank M. Freimann Professor of Physics, has been appointed to Armenia’s Expert Advisory Committee. The committee will advise Armenia’s Minister of Economy and the director of A.I. Alikhanyan National Science Laboratory (AANL) in developing a science strategy for the laboratory, in establishing an evolving administrative structure, and in evaluating scientific programs. Aprahamian was also invited to give a talk at the annual meeting of the National Academy of Sciences in the Republic of Armenia on April 14. 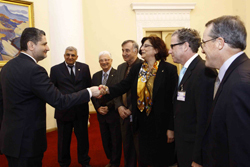 The advisory board’s other members include Yuri Oganessian, Scientific Leader of Flerov Laboratory of Nuclear Reactions, JINR, Dubna, Russian Federation; Thomas Haberer, director of the Heidelberg Ion Beam Therapy Center, Heidelberg, Germany; Sydney Gales, director of the National Laboratory of GANIL and director of the Institute for Nuclear and Particle Physics (INP23), France; and James. B. Roberto, deputy director for Science and Technologies, Oak Ridge National Laboratory, Tennessee. Aprahamian, a Fellow of the American Association for the Advancement of Science (AAAS), was elected a member of the National Academy of Sciences of Armenia in 2008.