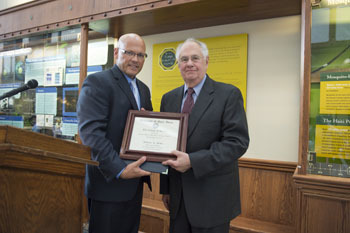 Anthony Hyder, professor of physics, received the Rev. James Shilts, C.S.C./Doris and Eugene Leonard Teaching Award at the annual College of Science Dean’s Awards Luncheon on Friday, May 15. As the college’s highest teaching honor, the award was named in honor of Rev. James Shilts, C.S.C., who taught in the Department of Physics from 1961 until 1982, and is presented annually for excellence in teaching at the undergraduate and/or graduate level.

Hyder was nominated by students and faculty in the College of Science. In a nomination letter, one student wrote, “In my view, one of the most important aspects of teaching is the learning community that the teacher creates… Prof. Hyder is the key individual in fostering a physics learning community at Notre Dame.”

Hyder graduated from the University of Notre Dame in 1962 with a Bachelor of Science in physics and earned his Ph.D. in physics from the Air Force Institute of Technology in 1971.  Hyder returned to Notre Dame in a professional capacity in 1991 as associate vice president for research and was responsible for the development of research activities across the University.  During his time in this position, he missed teaching and interaction with students, so he offered to teach one class a semester.  When he stepped down as associate vice president in 2006, he became a full-time member of the Department of Physics. Since then, he has taught courses such as Introductory Physics, Introductory Mechanics, Electricity & Magnetism, and Modern Physics and has taught and mentored hundreds of students over the years.