The Ara Parseghian Medical Research Fund (APMRF) at Notre Dame and its collaborators hosted a patient-focused drug development (PFDD) meeting on Niemann-Pick Type C (NPC) on March 18 to bring together those affected by the disease, the Food and Drug Administration, drug developers, and other stakeholders. 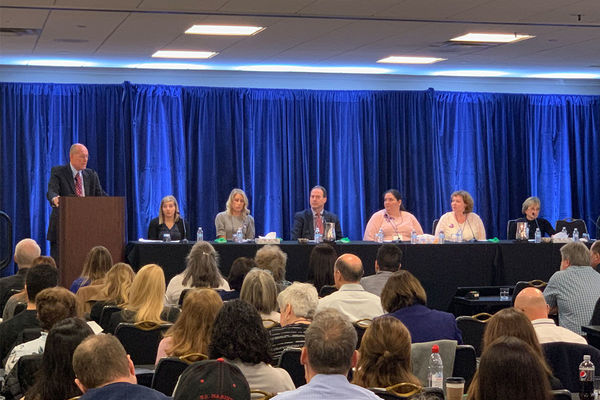 The PFDD meeting, held in Hyattsville, Maryland, provided persons with NPC disease the unique opportunity to share with the FDA and other stakeholders their daily challenges with NPC and their hopes for future treatments. This meeting followed the successful model established by the FDA to provide senior agency officials and other industry leaders with the opportunity to gain insights to help them develop therapies and evaluate potential treatments for the disease.

A highlight of the meeting was hearing from people with NPC and caregivers, who spoke on three different panels about their experiences with the disease symptoms and treatments and the impact of NPC on their daily lives.  More than 75 NPC family members attended the meeting, in addition to many more who participated in the live online broadcast, and these families also shared their thoughts during a series of discussion sessions following the panel remarks.

After opening remarks by Sean Kassen, director of the APMRF, the meeting featured remarks by Dr. Dragos Roman, the acting director of the FDA’s Division of Gastroenterology and Inborn Error Products, who spoke about the importance of the patient voice in the drug development process, noting that he admires the strength of the NPC community. Additionally, neurology professor Dr. Marc Patterson, Professor of Neurology, Pediatrics and Medical Genetics at Mayo Clinic Children’s Center, who is experienced in treating people with NPC, provided an overview of the disease and current treatments. Many representatives from the FDA, National Institutes of Health, industry, clinical hospitals, and NPC organizations also attended the meeting.  In total about 140 people attended the meeting with an additional 150 watching the webcast.

In the next few months, the APMRF will use the content shared at the meeting as well as data from a survey completed by nearly 100 NPC patients and caregivers to produce a Voice of the Patient report. The APMRF will share this report with the FDA and the NPC community.  To learn more about this initiative and to watch the meeting webcast, please visit NPC PFDD meeting website.

We would like to thank our collaborating organizations for this important effort, which include the Dana’s Angels Research Trust, Firefly Fund, Hide & Seek Foundation, Hope for Marian, Johnathan’s Dream, National Niemann-Pick Disease Foundation, and Niemann-Pick Canada.