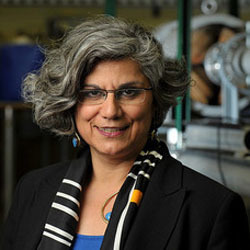 Ani Aprahamian, the Frank M. Freimann Professor of Physics, has been appointed to a three-year term on the Physics Policy Committee of the American Physics Society, effective January 1, 2013. The Physics Policy Committee addresses science policy issues that affect the development of physics, the health of the institutions in which physics is practiced, the resources available to physics, and the balanced use of these resources for the nation's scientific and technological needs.

Aprahamian's research interests lie in nuclear structure and nuclear astrophysics. Her current work relates to the elements heavier than iron, whose origin remains a scientific enigma; they cannot be formed by the normal nuclear fusion process in stars. It is thought that a neutron-rich explosive environment in the emerging shock front of a supernova may be responsible for the enhancement of the heavy elements, but experimental confirmation requires laboratory production of elusive, highly unstable nuclei in cutting-edge facilities. One such facility will be the Facility for Rare Isotopes Beams (FRIB) under construction at Michigan State University, for which Aprahamian serves as a member of the Science Advisory Committee.

Originally published by Shelly Goethals at physics.nd.edu on January 16, 2013.