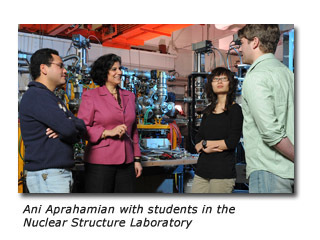 Ani Aprahamian, professor of physics, has been named the Frank M. Freimann Professor of Physics.

Aprahamian is an internationally esteemed experimental nuclear physicist with more than 100 peer-reviewed publications. She has presented over 130 invited talks around the world, and has served on a number of committees and panels ranging from providing advice on a number of critical national policies on the future of Nuclear Physics,  infrastructure issues associated with smaller facilities, policies for international collaboration/competition, to issues of broader concern of diversity and mentorship. She has been a program manager at the National Science Foundation (NSF) and is a member of the Board of Directors for the South Dakota Science and Technology Authority (SDSTA), an advising authority formed in preparation for the NSF’s proposed national Deep Underground Science and Engineering Laboratory (DUSEL).  In addition, Aprahamian has branched out into the field of medical physics, in particular isotopes, and is co-chairing  the Nuclear Science Advisory Committee (NSAC) Isotopes Subcommittee on the Isotope Development and Production for Research and Applications Program.  She presently serves as the Vice Chair of the 2010 Decadal Review of Nuclear Physics Committee for the National Science Academy. She has recently been elected Fellow of the American Association for the Advancement of Science (AAAS) and is an elected Fellow of the American Physical Society (APS). She is also a foreign member of the science academies in the Republic of Armenia.

Aprahamian is a world-recognized leader in the field of nuclear physics. Her research, teaching and vision has significantly impacted our University for over two decades and is a driving influence in the field of nuclear physics. She has been a major contributor to the success of the Notre Dame nuclear physics group. The group operates the Nuclear Structure Laboratory (NSL), an important, well-funded facility that supports their own research as well as hosts scores of visitors from around the world each year. She served as Director of the NSL from 2001-2006. During this time she was the lead Principle Investigator on a major NSF grant bringing in $1.1 million each year to support research in nuclear physics. She has supervised the research of more than a dozen Ph.D. and master’s students, as well as more than thirty undergraduates majors and REU students.