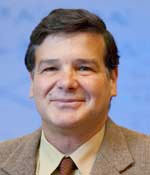 The American Physical Society has awarded Notre Dame physics alumnus Enrique Galvez the 2010 Prize for a Faculty Member for Research in an Undergraduate Institution. Galvez receives the award for his contributions to quantum optics, his enthusiastic inclusion of undergraduates in a significant way in his research and his contributions to the wider physics community.

Enrique "Kiko" Galvez completed his undergraduate studies in physics at the Pontifical Catholic University of Peru in 1980. He later obtained a Ph.D. in physics at the University Notre Dame in 1986, and did a post-doc at Stony Brook University. Since 1988, Galvez has been a permanent faculty at Colgate University. His early research involved experimental atomic physics of ion and atomic beams, measuring the Lamb shift in two-electron ions and studying highly excited Rydberg atoms. More recently, he has been studying classical and quantum properties of light, which includes geometric phases, helical modes of light, optical vortices and quantum interference with correlated photons.

Galvez has also taken an active role in developing new undergraduate laboratories and modernizing the physics curriculum at Colgate. He is known for involving undergraduate students in his research, resulting in more than 40 undergraduates listed as coauthors in his publications, and more than 70 listed or participating in conference presentations. Enrique Galvez has also been chair and organizer of several conferences, outreach workshops, and served as chair and other positions in the New York State Section of the American Physical Society. His past and present memberships include APS, OSA, AAPT, SPIE and CUR. He has also received numerous grants and awards for both research and education innovation.