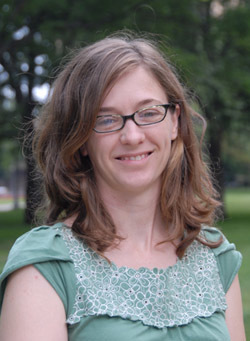 Elizabeth Archie, assistant professor of biological sciences has won a National Science Foundation CAREER Award, $750,000 across five years. The award, from the Animal Behavior Panel, will support her research into the spread of disease among wild animals.

She uses tools from population genetics, like those used to trace patterns in human migration, to follow the path of the parasites and pathogens. The study involves a population of wild baboons in Kenya that has been studied for about 40 years. The spread of disease among groups could result from males’ travel between territories or interaction at common watering holes, for example. Diseases within a group could spread from grooming, mating or other behaviors.

Archie, whose team includes two graduate students and probably four undergraduates, will travel to Kenya to observe baboon behavior and collect samples of the parasites and pathogens. She is also collaborating with two science teachers at the local Penn High School, where students eventually will produce video documentaries from video footage captured on the visits.