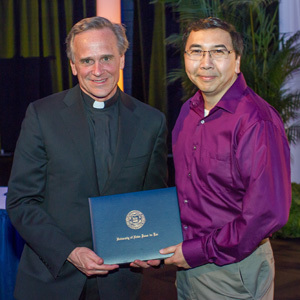 Arthur Lim, associate professor of the practice in the Department of Mathematics, won the Thomas P. Madden Award, which recognizes exceptional teaching of first-year undergraduate students. Lim was recognized at the annual President's Dinner on May 20. The Madden Award was established in 1962 by Rev. Theodore Hesburgh, C.S.C. when the First Year of Studies was established. Teachers of first year courses are nominated for the award by first-year students and the award recipient is selected by a panel of past recipients.

Lim teaches Calculus A and B for Life Sciences to first year students and Introduction to Dynamical Systems for Scientists to upperclassmen.  He is a tireless innovator and an enthusiastic promoter of analytical reasoning, a scholar whose personal charisma broadens the appeal of mathematics to even the most skeptical of students. He says he views teaching math as a “communication art” and is just as passionate about reaching his students as he is about his own research. His approach in the classroom incorporates all manner of media, reflecting his drive to illustrate every aspect of modern life, from the arts to science to medicine.

A winner of a Joyce Award for Excellence in Undergraduate Teaching in 2012, Lim is universally loved by students, respected and admired by colleagues across campus, and is invaluable as a mentor to younger instructors.

Lim joined the mathematics faculty at Notre Dame in 2006.  His research interests lie in combinatorial matrix analysis and its applications.  He is currently investigating the connection between differential equations and the representation of Lie algebras using combinatorial methods. Lim earned his Master of Science from National University of Singapore in 1996 and his Ph.D. at the University of Utah in 2001.