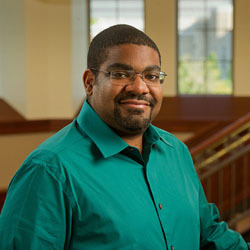 Reginald Hill, the Archibald Assistant Professor of Cancer Biology, has published an article, “Attacking Cancer at its Roots,” on the website Science 2034.  Science 2034 is an initiative from The Science Coalition that asks scientists, policy makers, and thought leaders to share what they think science will do for individuals, society and the world 20 years from now.

Hill, a faculty member of the Department of Biological Sciences and the Harper Cancer Research Institute, studies pancreatic cancer. Pancreatic Ductal Adenocarcinoma (PDAC) is the fourth leading cause of cancer–related deaths in the United States and has a five-year survival rate of six percent. Hill’s research group uses novel mouse models, human clinical samples, and newly-established assay systems to elucidate how the mircoenvironment or inflammation contributes to all three stages of tumorigenesis: initiation, progression, and therapeutic resistance.

“If we think of cancer as a weed, then chemotherapy is the weed killer we use in our attempts to eradicate this disease. Unfortunately, seventy-four percent of patients treated with chemotherapy show tumor recurrence. This dismal prognosis shows an urgent need for a different type weed killer,” Hill writes. “My hope is that by the year 2034, pancreatic cancer will no longer be a death sentence because federal funding will have provided for the development of novel therapies based on discoveries being made today about how this cancer grows.

Established in 1994, The Science Coalition is a nonprofit organization consisting of 60 major research universities dedicated to sustaining the federal government’s investment in basic scientific research as a means to stimulate the economy, spur innovation and drive America’s global competitiveness.  The Science 2034 initiative was established to celebrate The Science Coalition’s 20th anniversary.