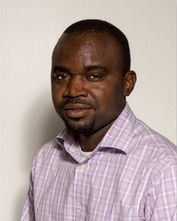 Akaa (Daniel) Ayangeakaa, Ph.D., has been selected as a recipient of the 2014 Shaheen Award. The highest honor bestowed on Notre Dame graduate students, the Eli J. and Helen Shaheen Awards were established in 1990 and are named for two long-time benefactors of the University. They recognize the superior academic achievements of a graduating student in each of the four divisions of the Graduate School—Engineering, the Humanities, Science, and the Social Sciences. Nominated by their departments, Shaheen Award winners are chosen for their superior ability as exhibited by grades, research, and publication records, fellowships, and other awards received during the course of study at Notre Dame, as well as teaching ability.

Ayangeakaa has performed research that is fundamental to our understanding of the structure and nature of atomic nuclei. He undertook a series of experiments to study what physicists call the “exotic properties” of weakly deformed and triaxially deformed nuclei — producing two very important results, with far-reaching implications.

Ayangeakaa’s research has resulted in two first-author publications in one year in the journal Physical Review Letters, the most sought-after and selective journal in physics. He was invited to present at the prestigious Gordon Research Conference, held biennially at Colby-Sawyer College in New London, N.H. Additionally, he won an outstanding graduate student teaching award in 2010 for his teaching of undergraduate physics courses.

Originally published by Shelly Goethals at physics.nd.edu on May 21, 2014.