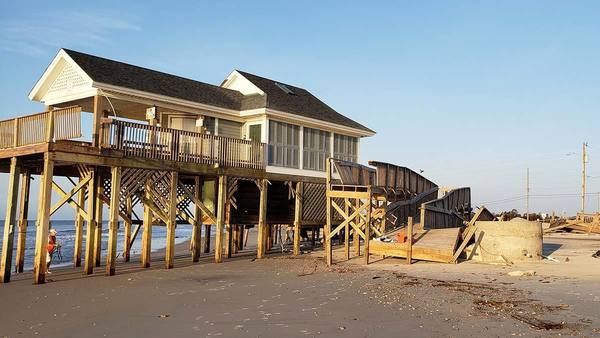 Believing in climate change has no effect on whether or not coastal homeowners are protecting their homes from climate change-related hazards, according to a new study from the University of Notre Dame.

Funded by Notre Dame’s Global Adaptation Initiative (ND-GAIN), the study analyzed data from a 2017 Coastal Homeowner Survey of 662 respondents in one of the most frequently exposed U.S. coastal communities, New Hanover County, North Carolina. Just one year after the survey, the county was affected by Hurricane Florence and was nearly missed by Hurricane Dorian in September.

“We found that climate change attitudes have little to no statistically significant effect on coastal homeowners’ actions towards home protection, homeowner action or homeowner intentions to act in the future,” said Tracy Kijewski-Correa, the Leo E. and Patti Ruth Linbeck Collegiate Chair and associate professor of civil and environmental engineering and earth sciences, associate professor of global affairs and co-author of the study. “This is despite the fact that with climate change, U.S. coastlines have experienced increased frequency and intensity of tropical storms and sea level rise, which has further heightened their vulnerability to waves, storm surge and high-tide flooding.”

According to the study published in Climatic Change, 81.5 percent of survey respondents believed climate change is “probably happening,” with varying degrees of confidence. The Notre Dame research team also measured for partisanship and ideology with the intention to control for questions about climate change that can tap into identity and prior political beliefs. However, after controlling for partisanship, the findings were unaffected.

“Despite persistent differences between Democrat and Republican ideologies in regards to climate change, the behavior of people from either party appears relatively similar. Neither has or intends to take action to improve the structural vulnerabilities of their homes,” said Debra Javeline, associate professor of political science at Notre Dame and lead author of the study. “Homeowners’ knowledge about climate change also held no significance, showing that providing more information and understanding may not be the main driver of convincing homeowners to reduce the vulnerabilities of their coastal homes.”

The research team found that although coastal homeowners may perceive a worsening of climate change-related hazards, these attitudes are largely unrelated to a homeowner’s expectations of actual home damage. Javeline says this may be a reflection of the limited communication about home vulnerabilities from other key stakeholders, like insurance companies, government agencies or sellers of home improvement products.

“Although increasing education and awareness of climate change is important, our findings suggest that encouraging homeowners to reduce the vulnerability of their coastal home may be more effective if expressed in regards to structural mitigation and its economic benefits, rather than in context of climate change,” said Javeline.

The study was co-authored by Angela Chesler, doctoral student in political science and the Kroc Institute for International Peace Studies at Notre Dame, and was developed in partnership with the Insurance Institute for Business and Home Safety and implemented by the survey research firm SSRS. The study also received the 2019 Paul A. Sabatier Best Conference Paper Award from the Science, Technology & Environmental Politics Section of the American Political Science Association.

Originally published by Jessica Sieff at news.nd.edu on October 08, 2019.