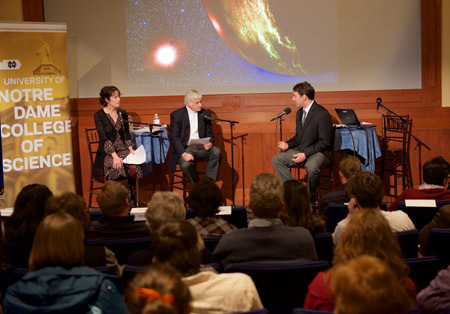 The College of Science recently welcomed Big Picture Science to campus for a recording of its show in front of a live audience. Big Picture Science is a national radio show and podcast that engages the public with modern science research. This event was part of a larger celebration of 150 years of science at Notre Dame.

Hosts Seth Shostak and Molly Bentley presented, “Sesquicentennial Science: You can’t pronounce it, but you’re going to hear about it,” at the Eck Visitors Center Auditorium. Astrophysicist Justin Crepp, the Frank M. Freimann Assistant Professor of Physics, was interviewed about his work involving the search for exoplanets, and data scientist Nitesh Chawla, the Frank M. Freimann Collegiate Associate Professor of Computer Science and Engineering, shared how Big Data can be used to understand climate change, our personal health, and a number of other topics. Both of these interviews were recorded for future broadcasts of Big Picture Science.

Crepp is an astrophysicist working in the field of exoplanet detection. His research focuses on the search for gas giant planets and habitable terrestrial worlds that orbit nearby stars other than the Sun. Crepp is the co-discoverer of more than 80 extrasolar planets, including Kepler 186f, one of the first Earth-like planets detected around another star. His research team is currently building an ultra-precise infrared spectrometer named iLocater for the Large Binocular Telescope in Arizona that will detect Earth-like planets orbiting in the habitable zone of the closest and lowest-mass stars in the galaxy, the M-dwarfs. 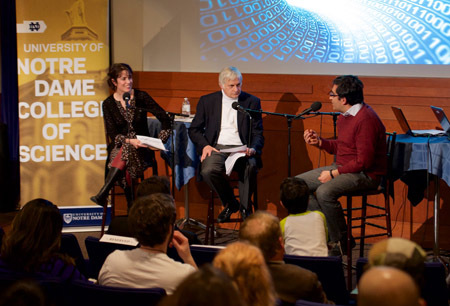 Nitesh Chawla (R) talks about his work with Big Data

“We’re trying to learn as much as we can from a very large distance. Astronomy is such a pure science because we can’t influence the experiment; everything is very far away,” Crepp said.

Chawla’s research focuses on Big Data and is making fundamental advances in network science and data science. His work bridges disciplinary boundaries for transformative applications in healthcare, education, environment, and national security. A common theme of his research program is, “Big Data for the Common Good.” In response to an audience member inquiry about the types of questions big data addresses, Chawla said, “One question of interest in our research program is: how do we develop data-driven models to more accurately predict the dynamics and evolution of networks? For example, there are over one billion individuals on Facebook. Why and how do individuals in these social networks become more influential in the future? Why and how do links form between members of the network? What is the predictability in these processes?”

In addition to the interviews, Shostak, Bentley and producer Gary Niederhoff recorded skits and gave the audience a behind the scenes look at how their radio show is created.

Big Picture Science airs locally on WVPE 88.1 every Sunday from 7:00-8:00 a.m. The program is produced weekly at the SETI Institute’s radio studio in Mountain View, Calif. To learn more about Big Picture Science and to find a list of stations across the country that broadcast the show weekly,  visit bigpicturescience.org.