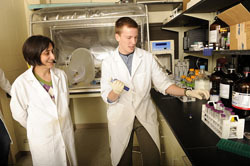 A senior biochemistry major, Ethan Ferguson, has led a team to develop a new, much more precise mass spectrometry method for the diagnosis of porphyrias.

Porphyrias are a collection of diseases in which a hemoglobin component called heme is improperly produced and causes a buildup of component material in the body. They can be either genetic or acquired through exposure to lead, hexachlorobenzene, or a variety of other widespread toxic agents; research and treatment require an exact diagnosis and awareness of cause, and therefore an exact identification and quantification of hemes and their metabolites.

The current standard identification practice is HPLC and UV detection, in which the compounds of interest are separated in a resin-filled column and analyzed via UV/vis spectroscopy. It's a functional system, but very time-consuming and not amenable to high-throughput testing. Mass spectrometry is much faster, more efficient, and more precise; it can differentiate between compounds with nearly identical structures. Ferguson's method also incorporates the existing practice: it can detect mass spectrometric and UV data in the same run.

The project was done under the supervision of associate professor of chemistry and biochemistry Jennifer DuBois, using new equipment in the Notre Dame Mass Spectrometry facility. Ferguson has been working with DuBois for the past two years, funded during the summer terms by the Dow Corning Corporation. An Indiana native, he is in the process of publishing his work and applying to research-intensive medical school programs.