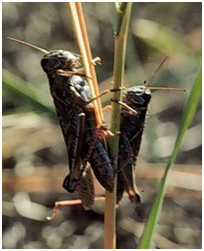 Literature and films have left us with vivid images of the grasshopper plagues that devastated the Great Plains in the 1870s. Although commonly referred to as grasshoppers, the infestations were actually by Rocky Mountain locusts.

The Rocky Mountain locust became extinct in 1902, but their cousins, grasshoppers and Mormon crickets, today still cause an estimated $1.5 billion (2005 U.S. dollars) in damage to grazing lands in the American West. A long-running research project directed by University of Notre Dame biologist Gary Belovsky, who also is director of the Notre Dame Environmental Research Center (UNDERC), is examining what limits grasshopper populations and the role played by grasshoppers in prairie ecosystems.

Belovsky’s research demonstrates that no single factor leads to a grasshopper outbreak, but, rather, multiple interacting factors are necessary. This requires sound understanding of how food and predators influence these native insects in combination with varying climate.
One of his key discoveries is that grasshoppers have a major impact on plants by changing the way nitrogen cycles in grasslands. Where grasshoppers speed up the process of nitrogen recycling by selectively feeding on plants that take longer to decompose, plant production increases. However, if they selectively feed on plants that decompose quickly, nitrogen becomes less available to the soil and plant production decreases.

Belovsky also used National Science Foundation funding to develop mathematical models to help predict significant spikes in grasshopper populations based on the number of grasshopper eggs. If egg numbers are low in the spring, grasshopper predators like birds and spiders can usually keep the populations under control. However, when eggs in the spring are especially numerous, more grasshoppers hatch and predators are unable to keep the populations under control, which can signal significant problems for rangeland ecosystems. However, if grasshoppers are very abundant, the young grasshoppers may actually compete for the rarer highly nutritious food plants and starve to death before they can grow up and cause damage to the range.

Belovsky’s research is now the longest running experimental study at a site examining what controls grasshopper numbers and, as such, Belovsky continues to acquire an unusually detailed and rich database of scientific information about Western rangelands. Additionally, UNDERC undergraduates, including a number of Native Americans, learn about this striking ecosystem and some participate in the research.

His research has the potential to make grasshopper plagues, like the Rocky Mountain locust, but a memory.