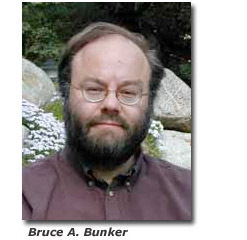 Bruce A. Bunker, professor of physics, has been elected Vice Chair and Chair Elect of the International X-ray Absorption Society, an international group with some 800 members including 200 in the United States. Bunker is director of the Materials Research Collaborative Access Team, a consortium that develops and uses x-ray beamlines at the Advanced Photon Source at Argonne National Laboratory near Chicago, one of the three most sophisticated x-ray synchrotron sources in the world.


The International x-ray Absorption Society holds an international meeting every three years. Bunker was co-director of a meeting in Chicago in 1998. Members in the United States meet more frequently, often in association with meetings in related areas. “We collaborate with people in physical chemistry, people in biology,” he says. His research uses x-ray absorption spectroscopy and x-ray scattering to study the structures of solids, liquids, surfaces and interfaces. In addition to addressing fundamental problems in condensed-matter physics, the work has application in such fields as technology, the environment and nanoparticles.