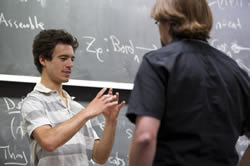 Organized by the Center for Mathematics at Notre Dame, a Focused Research Group Conference on Topology and Field Theories from June 4–8 gathered international researchers in the emerging field, concluding a four-year FRG initiative sponsored by the National Science Foundation. The event also concluded the Thematic Program on Topology and Field Theories, which included a week of summer school for undergraduates and a week for graduate students and postdoctoral associates, many of whom stayed for the conference.

Stephan Stolz, The Rev. John A. Zahm Professor of Mathematics and one of four principal investors in the FRG, said more conferences will be scheduled. “One of the important things about this conference is that a lot of people got to know a lot of other people,” he said. “This is an emerging area. For a newly emerging area you don’t have the infrastructure there. The senior people in the field know each other. It’s important to draw together these people who come from different places.” The field aims to understand physicists’ quantum field theory in mathematical terms.

Other principal investigators are Dennis Sullivan of CUNY and SUNY at Stony Brook, Mike Hopkins of Harvard University and Peter Teichner of the University of California Berkeley and the Max Planck Institute in Germany.  Invited speakers were Sullivan, David Ayala of Harvard, Ulrich Bunke of the University of Regensburg, Germany, Kevin Costello of Northwestern University, Sergei Gukov of Cal Tech, André Henriques of Utrecht, Netherlands, Jacob Lurie of Harvard, Chris Schommer-Pries of M.I.T. Four of the speakers also presented at the earlier summer school for graduate students and post-docs.

Joseph Hirsh, a Ph.D. candidate from CUNY, said informal discussions with other participants helped him find material for his thesis while the lectures helped him bridge ideas he understood with difficult new concepts. Michael Voelkl said the conference put him in contact with the field leaders he has been reading since he started his Ph.D. work in December at Regensburg. “I want to know who’s doing those papers I’m reading,” he said. “They are here. Stephan really has the right people here.”