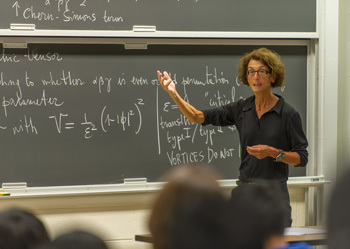 The Center for Mathematics recently hosted its annual three-week summer thematic program at the University of Notre Dame.  This year’s program focused on nonlinear partial differential equations (PDEs) in geometry and physics. The program is split into three week-long sessions: undergraduate summer school, graduate and postdoc summer school, and an international conference.

Almost all physical laws can be expressed as a PDEs. These equations describe movements such as the motion of planets in the solar system, the movement of molecules in a gas, the spread of a disease in the body, and spread of an oil slick on the surface of the ocean.

The undergraduate program focused on the basic theories of partial differential equations. During the second week of the program, there were four lecture series on topics ranging from mathematical models of superconductivity, which were given by Gabriella Tarantello of the Università di Roma and Fabrice Beuthel from the Université Pierre-et-Marie-Curie, to models of phase transitions, which were presented by Juncheng Wei of the University of British Colombia and Manuel del Pino from the Universidad de Chile. 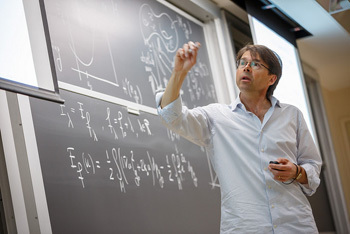 The international conference focused on recent research developments in the field of PDEs attracted over 50 participants from across the United States as well as Chile, Italy, France, Spain, Vietnam, Switzerland, and Canada.

“I am working in the area of geometric analysis. More specifically, I study some non-local operators that appear naturally in conformal geometry,” said María del Mar González Nogueras, professor at Universitat Politècnica de Catalunya in Barcelona, Spain. “This has been an excellent meeting in my area of research, with great lectures and international experts as speakers.”

"Over the last four years, the Center for Mathematics has brought some of the leading mathematicians in the world to campus to lecture on their work and to give introductory mini-courses to young researchers and graduate students," said Matthew Gursky, professor of mathematics and co-organizer of this year's program.  "In addition to benefiting the participants of the meetings and the wider mathematical community, the center has been an invaluable asset to raise the visibility of the mathematics department at Notre Dame.  We are starting to see really strong applicants to our graduate and postdoctoral programs whose interest in Notre Dame began when they attended one of the center programs."

The Center for Mathematics is beginning to plan the summer 2015 thematic program, which will focus on boundaries and dynamics. More information will be available at centerformath.nd.edu.