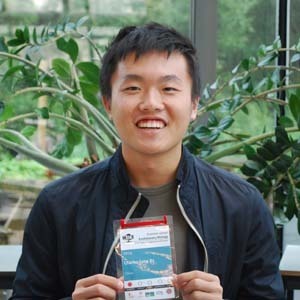 Senior environmental sciences major and Chinese minor Charles Cong Xu was recently accepted to the prestigious Erasmus Mundus Master Programme in Evolutionary Biology (MEME). MEME is a highly selective two-year research-oriented master’s program for students interested in studying evolution.  He has also been nominated to receive a scholarship to attend MEME from the European Union and will hear the results in early May.

Xu been an active researcher throughout his undergraduate career. “My love for research was originally inspired by a graduate student in Professor David Lodge’s lab, Cameron Turner, who gave me my first taste of life as a scientist. We went out to sample water across the Great Lakes on multiple camping trips and I've been hooked ever since.”

He has had the opportunity to take his passion for research beyond Notre Dame, having completed research internship positions at Harvard University and the Chinese University of Hong Kong. This academic year, Xu is working with Jeffrey Feder, professor of biological sciences, on multiple projects involving speciation genomics of apple maggot flies and is finishing an independent research project on spider web environmental DNA in collaboration with the Potawatomi Zoo in South Bend.

MEME is a joint program between the University of Groningen (Netherlands), Ludwig Maximilians University of Munich (Germany), Uppsala University (Sweden), University of Montpellier 2 (France) and Harvard University.  He will begin his studies at Groningen for the first semester and then move to either Montpellier or Munich during the second semester. For the second year of study, Xu will select two of the five universities to complete individual research projects each semester. Upon completion of the program, he will be awarded a double degree from two partner universities.

“I found the MEME program when I was a freshman and it has been on my mind ever since. The fact that students get to travel to multiple countries across Europe with classmates from all over the world is incredible,” Xu explained. “Having such an international learning environment composed of top faculty and students who are equally passionate about evolutionary biology research will be one of a kind. I have already come into contact with a future classmate from Syria and have learned so much that I could not otherwise learn within the classroom.”

“Charles is one of the most gifted undergraduates I’ve had the chance to work with,” said Jeffrey Thibert, Ph.D., assistant director of national fellowships for the Center for Undergraduate Scholarly Engagement.  “We worked on some drafts of his MEME application, and I was consistently impressed not only with the brilliance of his scientific thinking, but also with the clarity with which he could explain his research interests and the enthusiasm he has his for his work. I imagine we’ll be hearing about some of his discoveries in the near future.”

After graduation from MEME, Xu plans to pursue a Ph.D. in evolutionary biology with the goal of either becoming a professor or going into research at an international nonprofit or zoo.