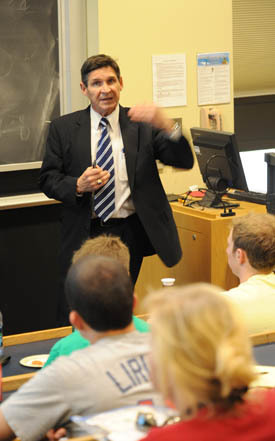 Michael Flavin is Chairman & CEO of Advanced Life Sciences (ADLS.OB), a biopharmaceutical company focused on the development of new drugs to fight infection, inflammation and cancer.  Flavin graduated from the University of Notre Dame with a bachelor’s degree in chemistry in 1978, and has started five companies related to drug discovery and development. In the past 20 years, he has raised more than $240 million for the work and taken a new antibiotic to last-stage clinical trials.

Flavin worked for two years for Baxter after he earned a Ph.D. at the University of Illinois and did postdoctoral work at Harvard University. He started MediChem Life Sciences in 1987 with a $50,000 SBIR grant, formed a joint venture in 1995 with the Malaysian government to fund development of the HIV drug Calanolide A, and sold the firm in 2002 to deCODE genetics Inc. in an $83 million stock transaction.

MediChem, which enjoyed 42 percent revenue growth rate, grew to 230 employees, including 173 scientists and 73 Ph.D.s, conducted more than 500 projects for 90 companies and opened the Woodridge Discovery Center near Argonne National Laboratory in the Chicago area. Success came partly because he entered the market at a time when large companies were beginning to outsource their drug research and development, he said.

After the sale, Flavin started Flavin Ventures, LLC that funded his Advanced Life Sciences, a product company for discovering and developing drugs in fields of oncology and infectious disease. He learned that Abbott was spinning off a potential antibiotic candidate about six years ago and took over the trials for the drug, now called Restanza. The drug, proven effective against a resistant strain of pneumonia, is in its final trials. Flavin Ventures also started Shamrock Structures, focused on providing structural biology services for other companies, and BioStart Property Group, which has built more than 200,000 square feet of laboratory and office space.

“You can graduate from Notre Dame,” Flavin told a Notre Dame undergraduate class in scientific entrepreneurship. “You can start companies. You’ll be surprised how much value you can create if you’re willing to stay with it over a number of years.”