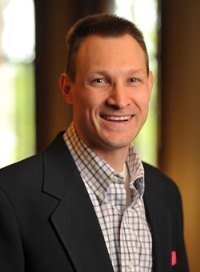 The University has recognized four faculty and staff members from the Department of Chemistry and Biochemistry for their research, teaching and service.

Office of the President

Garret Moraski, administrative research technician-lab program manager, is the recipient of the 2012 Presidential Achievement Award.  The Presidential Achievement Award is given in recognition of breakthrough initiatives, extraordinary innovations and significant contributions to the University’s long-term success.  Moraski serves as a lab manager, writes manuscripts and patent applications, prepares seminars, organizes chemical data and results from assays by many collaborators around the world, prepares successful grant applications, and even helps organize startup/spin off companies. He has discovered potential new therapies for dreaded diseases like tuberculosis, drug-resistant bacterial infections, and cancer, and shares his knowledge through publications and patents.  The results have attracted considerable attention to Notre Dame with several intellectual property developments that have been licensed or are under negotiation.  Moraski is described as, “the ideal role model for enthusiastically doing innovative research, sharing it through publications and patents while being a congenial, constructive and positive ambassador for the power of knowledge.”

Office of the Provost

Shahriar Mobashery, Navari Family Professor of Life Sciences, is the recipient of the 2012 Research Achievement Award.  Recognized for his contributions to some of the greatest challenges of biomedical research, Mobashery is best known for his work on drug-resistant bacteria and diseases of the extracellular matrix.  These studies are being applied to cancer metastasis, diabetes, stroke and idiopathic pulmonary fibrosis, a disease of the lungs that kills 100 percent of those afflicted within three years. In particular, he and his colleagues have recently developed therapeutics for stroke and traumatic brain injury that have the potential of greatly reducing damaged caused by such events.  He has published more than 260 articles and one book and currently holds 13 patents.  For his work in understanding drug-resistant bacteria, he received the Astella USA Foundation Award, the most prestigious award given by the American Chemical Society for medicinal chemists.

Holly Goodson, associate professor of chemistry and biochemistry, is the recipient of the 2012 Thomas P. Madden Award, recognizing exceptional teaching of first-year students. In her 12 years at Notre Dame, she has developed a reputation as an educator who inspires students to think creatively beyond traditional disciplinary boundaries.  This is exemplified by her leadership in providing first-year engineering students with an understanding of the more biological aspects of chemistry.  Since 2005, she has taught the class General Chemistry: Fundamental Principals and Biological Processes, which has grown from 240 students to more than 500 last semester.

Brian Baker, associate professor of chemistry and biochemistry, is the recipient of the 2012 Director of Graduate Studies Award. Baker has sponsored a number of important initiatives in his department, including changes to the early-examination process for doctoral students, encouraging faculty to support more students on external grants, and changing department’s teaching assistant support model. Along with his colleagues, he has raised the number of applications to the chemistry and biochemistry program by 80 percent in the last two years, which has resulted in a corresponding rise in the department’s selectivity percentage. These efforts places Notre Dame’s graduate program above the mean for top-quartile chemistry programs nationwide.  Baker has also been the leading force behind the development of a newly launched doctoral program at the University, the Integrated Biomedical Sciences program, an interdisciplinary Ph.D. program involving five departments on campus that focus on research and training in a range of fields in the biomedical sciences.