On January 3, the front cover of the Chronicle of Higher Education featured an article on the Rev. John I. Jenkins titled, “The Priest President: As Notre Dame wrestles with its Catholic character, a strong voice emerges.” The article incorporates a scene from Father Jenkins’ mass for College of Science at the beginning of the 2009-2010 academic year.

The article recounts the anecdote Father Jenkins told about his father, a doctor and medical school professor, who was committed both to the scientific method and to a humane bedside manner: “Combining science with moral and religious truths made his father a more effective doctor, Father Jenkins told them, and it can ‘make you more powerful scientists and people.’”

The story opens with Father Jenkins’ counsel to a senior philosophy and biology major who was struggling with a crisis of faith that resulted partly from his course work. Jenkins shared his own questioning while he was a Notre Dame student and encouraged the student to take the opportunity to consider faith questions more deeply. 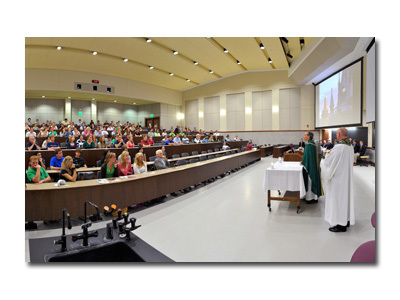