A tour guide shared that the overall goal of the Notre Dame educational experience was not only for students to learn, but to discern how to apply their knowledge to help a neighbor. 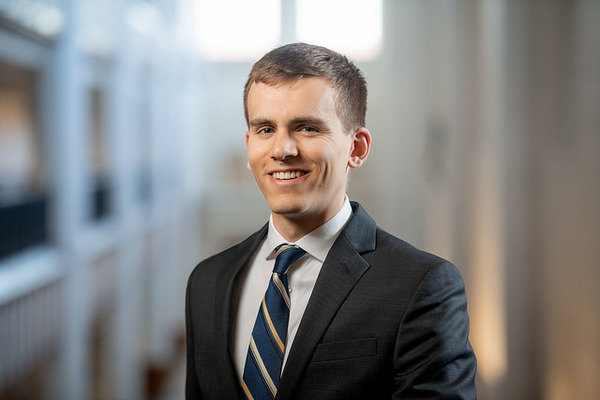 Grose, who will earn a Bachelor of Science degree in preprofessional studies with a major in Spanish, realized his neighbor was the Latino community. He developed a deep respect for the culture because of his study of Spanish and a transformative trip to El Salvador last year through the University’s Center for Social Concerns’ International Summer Service Learning Program.

Class of 2018 salutatorian Harisa Spahic, who will earn a Bachelor of Science degree in biochemistry, was already building houses for her “neighbors” during high school as a volunteer for Habitat for Humanity. She continued that volunteer service at Notre Dame.

Grose and Spahic combined strong scholarship and service toward a similar goal: medical school. Spahic will attend Johns Hopkins University School of Medicine in August. Grose plans to attend medical school—combining the degree with a master’s in public health—after completing a master’s degree in Iberian and Latin American studies next year at Notre Dame.

Their paths toward their shared goals, however, reflect the diversity not only of the students, but also of the opportunities found throughout the University.

Grose, of Sheboygan, Wisconsin, has a passion for words. The words he will speak during his valedictory address for the 173rd University Commencement Ceremony were as carefully considered as his message. His self-described “soundtrack to Sunday mornings” as a child included listening to his father, a urologist, dictate patient charts in a clipped cadence at the hospital after attending morning Mass. The words and phrases fascinated Grose. At age eight, after watching the Scripps National Spelling Bee on television, he committed himself to competing in the bee someday.

Daily practice for six years allowed him to reach his goal in both seventh and eighth grades. In eighth grade he earned fifth place in the national bee.

“It was not an exercise in rote memorization for me; it was a real study to understand how words and languages fit together, and how they are the basis of many other things that go beyond the spoken word,” he said. “Literature. Culture. Food—especially for me. In that sense, words and languages have always been central to me.”

The son of a physician, Grose long considered pursing a medical career. But it was not until his mission trip to El Salvador during the summer of 2017 that he fully grasped how he could combine medicine with his Spanish skills through the field of public health.

One of his roles during the mission was to weigh children and measure them from head to heel. An infant with bilateral club feet was placed on the table in front of him during his second week. Grose did not know how to measure the child because of the deformity in which his feet were bowed outward.

“I felt in that moment that I could not do anything for him,” Grose said. “I felt, ultimately, powerless and I guess I was a little devastated in the moment.”

Grose quickly realized his misgivings were unwarranted, and a window of opportunity replaced the moment of powerlessness. “My team leader told me that, if I’m really dedicated to this, I needed to understand that this is something they encounter constantly, but it motivates them to keep going.”

A drummer in the Notre Dame Marching Band, Grose’s passion for public heath was further fueled during the mission when he took charge of a “Mommy and Me” music class, leading nursery songs while banging on a tambourine. The sessions opened up a dialogue that allowed Grose, who grew up in a comfortable home with material privileges, to understand the connection between health, medicine, and poverty.

After medical school, Grose hopes to use his experiences to work in public health, moving among clinics in the United States, Central America, or Mexico. He would like to strike a balance between work as a local physician and a globally minded public health worker. 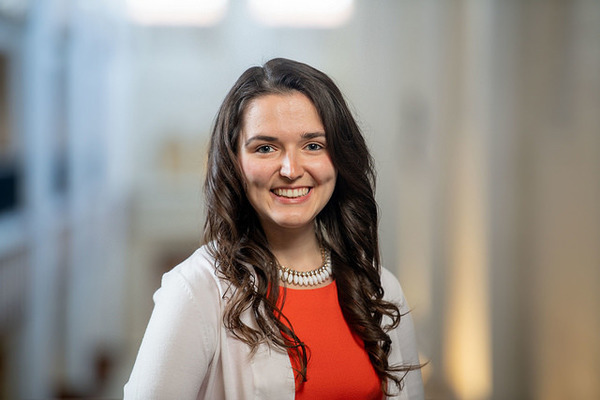 Harisa Spahic, from Granger, Indiana, plans to pursue academic medicine, combining research with a medical practice focusing on women’s health. She is a first-generation college student whose parents were Bosnian refugees and was herself born a refugee. Spahic was drawn to medicine because she had positive encounters with her pediatrician.

As a child, “I think I really got interested in being an OB/GYN because they deliver babies, and I thought that was cool,” she said. “But over time and as I got older, I knew I enjoyed learning more about women’s health.” She hopes to integrate her knowledge of the basic sciences and anthropology to address pressing issues in women’s health, including  the high maternal and infant mortality in the United States.

Unlike Grose, who is Catholic and arrived for his first campus tour without qualms, Spahic was conflicted when she discovered she was matched with Notre Dame through the QuestBridge program, a scholarship program for high-achieving, lower-income students.

“It was intimidating and I was hesitant because not only am I not Catholic, but I’m also not very religious,” she said. “But my parents were exceptionally excited when I was accepted at Notre Dame—it was a tremendous honor—and when I came for a visit, it just changed everything. I fell in love with this school and couldn’t wait to come.”

In fact, though Spahic majored in biochemistry, her two required theology courses were among her favorite. “It was information I had never been exposed to, so it was a brand new experience. One was a science and theology class, so connecting what I knew really well to what I didn’t know as well was even more interesting.”

Spahic volunteered weekly at the Center for Hospice Care in addition to her work for Habitat for Humanity. She learned how to integrate her studies with her extracurricular activities in ways that fulfilled her. Spahic looks forward to volunteering at hospice each week to interact with patients in a clinical setting. Habitat for Humanity offered her a mental respite because she enjoys interacting with people from all walks of life.

Her blend of activities makes her a credible source of advice to other students who would like to attend medical school.

“Don’t ever just do things for an application or just because you think you have to do it,” she said. “That is the biggest thing I learned. Do the activities you are passionate about. It is the activities you are passionate about that should guide what you want to do with your life. Applications should not dictate your life, because life is really short, and you have only so much time to give.”

Both Grose and Spahic recommend that students not focus and stress about grades—although they are important, no student should shower themselves with stress to get all As or plan to be named valedictorian or salutatorian. Spahic pointed out that pre-med coursework is difficult, but echoed the words of advisors and professors that the rigor is not intended to weed out students. It’s to show them what they’ll encounter in medical school and beyond.

“Chemistry and biology are very hard, but the professors are not doing it to dissuade you; they are doing it to inform you,” she said.

Both students expressed full appreciation of the culture at Notre Dame, where professors give freely and patiently of their time during office hours, where an undercurrent of respect prevails, and where a solid foundation built on ethics and values embraces students of all faiths.

“The Notre Dame experience has been a real opportunity to not only find out what my strengths and weaknesses are, but to find out who my neighbor really is for me,” said Grose.