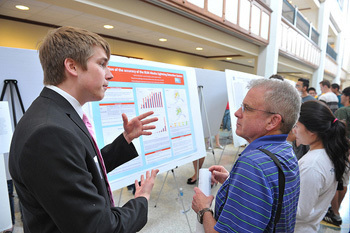 The College of Science Joint Annual Meeting (COS-JAM) attracted over 300 student attendees to the Jordan Hall of Science on Friday, May 3. This year, 146 abstracts were submitted from 188 undergraduate researchers.  Students presented their original research in the areas of Applied and Computational Mathematics and Statistics, Biological Sciences, Chemistry and Biochemistry, Mathematics, and Physics.  In addition, six guest presenters from the Northern Indiana Regional Science and Engineering Fair for K–12 students exhibited their research in the Galleria.  Participation at this year’s event was the largest in the seven-year history of COS-JAM.

To review the complete collection of 2013 abstracts, visit the COS-JAM webpage.  Here are highlights from a few of the presentations: 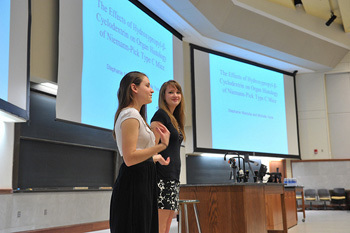 Biochemistry major Stephanie Maciuba and biological sciences major Michelle Yanik gave a presentation titled, “The Effects of Hydropropyl-β-Cycolodextrin on Organ Histology of Niemann-Pick Type C Mice.”  Niemann-Pick Type C (NPC) disease is a rare, neurodegenerative disease with symptoms that include deterioration of memory and balance, lung and liver failure, delayed motor development, and seizures. Advised by Kasturi Haldar, the students used a mouse model to study the effects of hydropropyl-β-cyclodextrin on NPC disease progression in the brain, spleen and liver, and used a neurobehavioral scoring system similar to one used by the National Institutes of Health to score the appearance of symptoms.  Although the mice still ultimately succumbed to NPC, their results showed that cyclodextrin slowed the progression of neurodegeneration.

Ansel Nalin, a chemistry major, discussed his project, “Synthesis of Diospongins A, B, and C.” Nalin worked with Richard Taylor’s research group to find ways to synthesize natural products that do not occur in very high levels in nature, but have the potential for wider uses, such as pharmaceuticals. He discussed how he developed a new reaction and how it was used to prepare diospongins, a group of compounds that have prevents calcium release and could have potential applications for osteoporosis treatment.   His work was recently accepted by the journal Tetrahedron and will be published later this year.

Physics and economics double major Kirby Hermansen and physics major Sean Howard discussed their work in the Nuclear Science Lab (NSL) in a presentation called, “Carbon-14 AMS: Establishing a Carbon-Dating Process at Notre Dame.”  Using accelerator mass spectrometry (AMS), scientists can measure a precise ratio of carbon-14 in a specific sample and determine its age. The students analyzed past experimental runs in the lab and determined that the initial ion beam tunes needed to be further developed.  The students are working to optimize the AMS procedure by finding the ideal transmission levels and accelerator stability so that the measurements of samples taken are consistent and repeatable. Optimizing the process will allow for interdisciplinary work throughout Notre Dame and will have applications in anthropology, geology and biology. Hermansen and Howard were advised by Philippe Colon. 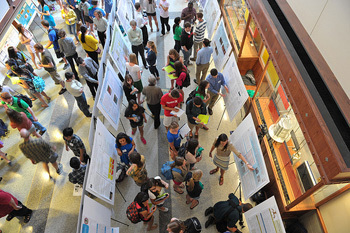 Fernando SanJuan, an applied and computational mathematics and statistics major, gave a poster presentation called the “Clustering Dynamics of the Myxococcus xanthus Bacteria.” Advised by Mark Alber, he works with the Myxobacteria group, a group of researchers who use mathematics as a tool to study the formation of bacteria clusters during the swarming process. SanJuan specifically works on studying the effects the adhesive parameter has on clustering dynamics. He created two MATLAB programs that use the raw data generated by the simulations and clustering analysis algorithms, and calculated the distance traveled by a cluster of bacteria, and the speed at which the cluster moved. His results showed that the bigger the adhesive value of cells, the more neighbors the cells are expected to have. He also found that there was a negative correlation between the distance traveled and the cluster size. Also, the average of speed of the clusters decreased as the adhesive value increased.

Environmental sciences major, Nicholas Kalejs, discussed his project, “The Effects of Biotic and Abiotic Factors on Lithobates sylvaticus Tadpole Body Mass.” Tadpoles of the wood frog (Lithobates sylvaticus) can be found in a variety of small ponds and lakes. Among these habitats, predators, aquatic plants, and abiotic factors can be highly variable, which can affect the growth and development of tadpoles. Using tadpoles, collected from nine ponds at the University of Notre Dame Environmental Research Center (UNDERC), Kalejs tested the effects of pond temperature, predator density, dissolved oxygen content, and percent of emergent plans on the body mass of the tadpoles. His results showed that variability in body mass of the tadpoles was positively correlated with predator density and dissolved oxygen content, which indicates that body mass can be affect by certain environmental pressures. Kalejs was advised by Matthew Michel at Saint Louis University.

Mathematics major, Daniel Irvine, gave a poster presentation called “ECH Capacities of a Non-Convex Domain.” Sympletic geometry is the mathematical language of classical and quantum mechanics. Embedded Contact Homology (ECH) is a tool which can be used to study the embedding properties of symplectic manifolds, four-dimensional manifolds equipped with a closed nondegenerate differential two-form.  On the category of ellipsoids, ECH capacities can be computed purely combinatorially, and they give sharp obstructions to symplectic embeddings.  Advised by Daniel Cristofaro-Gardiner at the University of California, Berkeley, Irvine investigated the ECH capacities of various non-convex unions of ellipsoids. In certain interesting cases, he was able to find similar combinatorial formulas for their ECH capacities

Joshua De St Jean, a winner at the Northern Indiana Regional Science and Engineering Fair, presented “Break It-Down, Hot Dog Style.”  His project studied which microorganism could break down food faster, S. thermo, a type of bacteria found in the human digestive tract, or yeast.  His hopes were that the results of his experiment could provide a solution to remove processed food out of landfills faster.  He simulated a landfill environment by placing soil and a hot dog in five different jars. Four of the jars each contained one type of bacteria, S. thermo, active yeast, baker’s yeast, and red rice yeast. The last jar was left as a control.  De St Jean’s results showed that the active yeast worked the best as it decomposed the hot dog completely.