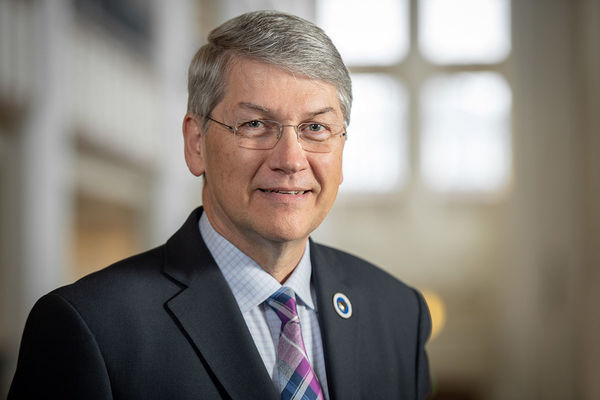 Dominic Vachon was a senior at the University of Notre Dame when his brother, then 14, was diagnosed with cancer. He distinctly remembers what his family went through as the cancer went in and out of remission before his brother died, four years later.

“I witnessed some caregivers who were wonderful and some who were much less skilled with people,” said Vachon, now the John G. Sheedy, M.D., Director of the Ruth M. Hillebrand Center for Compassionate Care in Medicine. His brother’s journey was the first inspiration for Vachon’s upcoming book, How Doctors Care: The Science of Compassion and Balanced Caring in Medicine. It will be released September 5 by Cognella Academic Publishing.

After graduating from Notre Dame with a bachelor’s degree and earning a master of divinity degree here, Vachon earned his doctoral degree in counseling psychology from Loyola University, with a focus on helping health care professionals combat burnout. But his second inspiration for the book came afterwards, while he was working as a psychologist. He became discouraged and bitter at patients he began to perceive as entitled, or difficult, or so seriously ill that they were beyond care.

“I came home one day and I said to my wife, ‘I hate my patients,’” he described of that time 25 years ago. “And I was a person who studied compassion…I had become like the helping professionals I criticized.”

He realized he had to go back to the drawing board personally and professionally. He sought out people who were noted for their work on caring, including Jean Watson, founder of the Watson Caring Science Institute. He began practices to improve caring for his spirit, including attending annual hermitage retreats in the Colorado mountains.

His passion for helping others returned and he began teaching physicians in a hospital residency program. There he observed how physicians and nurses also went through periods of “compassion collapse” just has he did.  In the process of working with them he discovered what led to that “compassion fatigue” and what would help them recover their compassion. As he continued his practice of reflecting on this at his yearly hermitage retreats, he began writing this book on what he discovered about being balanced in caring for patients. As he contemplated and studied compassion in health care fields, and taught courses about it, the book continued to grow. By 2012, Vachon thought it was complete.

But after attending a conference in Colorado that described the brain biology and neuroscience behind compassion, he realized he had only written the second half of the book.  Compassion was often equated with bedside manner, and considered a soft skill for physicians. When teaching physician residents, Vachon often approached the topic tentatively. The conference showed him that his and others’  notion of compassion as a soft skill was incorrect. The medical field needed to have this new science of compassion practically applied to clinical practice and training.

“If you are not practicing with the science of compassion, you are operating with outdated medicine,” Vachon said. After he came to that conclusion, he taught physicians and other clinicians without doubts about the central importance of compassionate caring. He is now firm with his teaching that compassion is rooted in biology, evolutionary biology, psychology, and neuroscience.

“Compassion is not only the key element in excellent patient care; paradoxically it is essential to physician well-being and resilience,” Vachon said.

Because Vachon wanted the book to stress the science behind caring, the previous work he had done—including his model on how to practice medicine in a balanced compassionate manner—moved to the second half of the book, with the new discoveries on the science of compassion in the first part of the book.

The book is to be used as a field manual for clinical practice that explains what physicians and other clinicians can do to provide balanced and compassionate caring for patients without becoming emotionally detached or overwhelmed. It provides a research-informed and non-sentimental description of the physician clinician compassion mindset.

The book is can also be used in medical training both in medical schools and residency training, Vachon said, and is being used in innovative courses at the undergraduate level that provides students with information they are not likely to get in later medical training. For instance, there are chapters on the biology and neuroscience of compassionate caring, healthy and dysfunctional types of helping, and attitudes for balanced compassionate caring, among many others.

“In this book, the science of compassionate care is not reduced to bedside manner,” Vachon said.  Compassion includes the ability of the surgeon, for example, whose trained attention and superb emotional composure makes successful surgery possible. “That mental focus is also compassion,” Vachon noted.

He likened the discovery of the science of compassion ago to the feeling he got when he saw the first images from the Hubble Space Telescope more than 25 years ago. “We’re finally able to see and understand compassion like we have never seen it before, and it will be the key to the future of providing excellent patient care and sustaining our clinicians in this difficult work,” Vachon said.