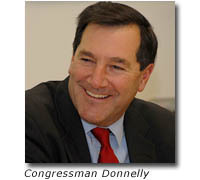 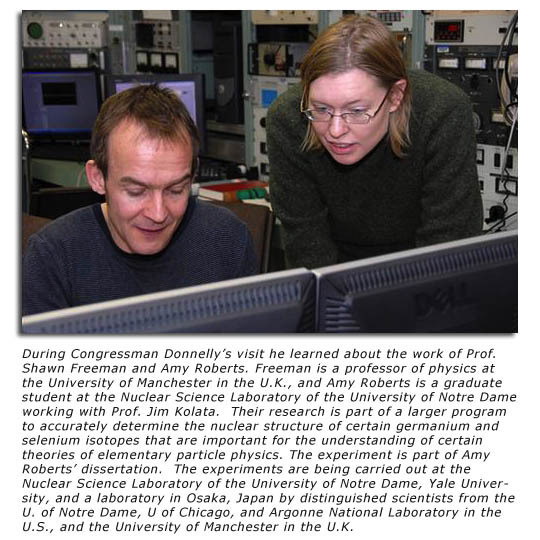 Congressman Joe Donnelly (IN-2) and his science staffer Paul Gether visited the Nuclear Science Laboratory at Notre Dame on Wednesday December 3, 2008. The Congressman was invited by Professor Umesh Garg of the Physics Department. The Nuclear Science Laboratory is one of the highest funded research enterprises in the state of Indiana and falls within the district of the congressman. The Congressman was given a brief overview of the history of the nuclear physics research at Notre Dame which spans more than 70 years. Presently, the laboratory is home to a physics frontier center JINA, Joint Institute of Nuclear Astrophysics, and the Institute for Structure and Nuclear Astrophysics (ISNAP). Research efforts in the laboratory are funded by the National Science Foundation at a level of approximately $4M/year.

The Congressman is a member of the subcommittee on Conservation, Credit, Energy, and Research. He met with scientists working in the laboratory and toured the facilities at Notre Dame including the four accelerators. The congressman is interested in nuclear non-proliferation issues particularly with respect to the Iran. Other issues of interest to the congressman were nuclear energy for the U.S. and disposal of nuclear waste.

Congressman Donnelly is a Notre Dame alumnus with a major in government who had limited exposure to science while he was a student at Notre Dame. Donnelly was heard claiming that all the “science genes” in their dorm room were taken up by Paul Bohn who is now the Schmitt Professor of Chemical and Biomolecular Engineering at Notre Dame.