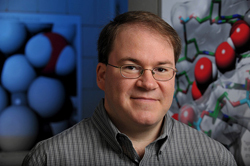 Steven Corcelli, assistant professor in the Department of Chemistry and Biochemistry, attended the 17th German-American Kavli Frontiers of Science symposium in California. His participation identifies Corcelli as a Kavli Fellow, a group that has included more than 100 National Academy of Science members and eight Nobel Prize winners since it started in 1989. The event is sponsored by the Alexander von Humboldt Foundation and the U.S. National Academy of Sciences.

Unlike many conferences with in-depth technical presentations in narrow fields, the Kavli symposium gathers participants from a broad range of fields to encourage out-of-the-silo thinking and networking. Topics included memory, climate change and biodiversity, mathematics of pattern and structure, and quantum mechanics on the macroscale.

Corcelli, whose research involves computer simulations of biomolecules aimed at identifying their function at the molecular scale, gave a poster presentation. “The people who presented were strongly encouraged to remove all jargon,” he said. “The different fields are separate enough that the terminology is really different. You had to convey that information to other scientists in completely different disciplines. It was ‘frontiers of science.’ That pervaded the entire meeting.”