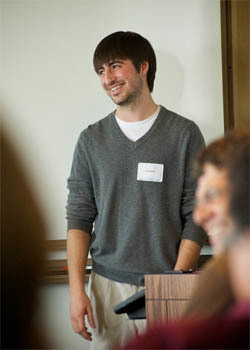 The annual College of Science Joint Annual Meeting (COS JAM) on April 30 attracted hundreds of students and visitors to the Jordan Hall of Science, where they could see and hear 77 undergraduate presentations in Physics, Chemistry and Biochemistry, Mathematics and Biological Sciences. Twenty-six undergraduates made oral presentations and 51 students discussed their research through poster presentations, some representing groups of students and an entire class. Five guest presenters that won Spirit of Science Awards from the Northern Indiana Regional Science and Engineering Fair for elementary and high school students also were exhibited in the Galleria.

Nancy Paul, advised by Ani Aprahamian in the Department of Physics, presented “Sensitivity of R-process Abundances to Nuclear Masses.” The research identifies nuclei whose masses have the greatest impact on r-process simulation abundances. The results will guide experiments at radioactive ion-beam facilities where the nuclei can be measured. The r-process is thought to be the source of about half the elements heavier than iron. Identifying the mass of nuclei reveals the energy available for neutron capture. 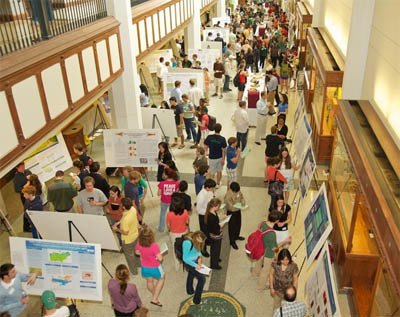 Carlos Briseno, advised by Suzanne Bohlson of the IU School of Medicine – South Bend, presented “Generation of Recombinant Murine CD93 in a Mammalian Expression System.” CD93 is involved in inflammation, and understanding it could have application to such illnesses as rheumatoid arthritis. Briseno has succeeded in producing CD93 and is in the process of purifying it so he can generate an antibody, characterize the antibody’s activity and assess its ability to regulate inflammation.

Shayna Sura and Margaret McQuillan of the Department of Biological Sciences presented “Effects of artificial light sources on Photeros annecohenae densities.” The project involved a two-week visit to Belize with Gretchen Gerrish, who had noticed an absence of bioluminescent ostracods at lighted docks. Male ostracods require a darkness threshold for their reproductive displays. The research showed a decline in adults in lighted areas but an unexplained jump in the number of juveniles.

James Rudloff of the Department of Chemistry and Biochemistry, advised by Marvin Miller, presented “Acylated Isoxazolidines: Potential Scaffolds for a New Class of Antibiotics.” The work is part of the Miller lab’s efforts to develop a new basic structure for antibiotics to counter the evolutionary gains that most bacteria have achieved against the class of Beta-lactams. The research shows promise, Rudloff said, but requires extensive development.

An entire class of students advised by Kasturi Haldar, professor of Biological Science, presented “Clinical management of Cerebral Malaria at Queen Elizabeth Hospital, Blantyre, Malawi.” The group, which worked with Terry Taylor at the hospital, examined 198 patient records for fever and coma scores in an effort to determine whether fever contributes to neurological problems in survivors. Fever is not treated because it kills the disease-causing parasites, but further research could reveal a threshold temperature that would kill parasites without causing damage.

Katherine Manley of the Department of Mathematics, advised by Alex Himonas and Thomas Cosimano, presented “An interdisciplinary Analysis of the Causes and Effects of the Current Economic Crisis.” Manley studied the history of banking and the financial instruments in place in 2008. To calculate how the crisis will evolve, she added a time derivative to an established financial equation. The two partial differential equations she developed do not yet have solutions.