The Center for Social Cocerns is hosting a screening of the documentary "Crude: The Real Price of Oil" thus Wednesday September 17 at 7:00 PM in Andrews Auditorium in the basement of Geddes Hall.

The film follows the dramatic $27 billion legal case brought against Chevron in a class-action lawsuit from 30,000 Ecuadorians in the Amazonian rainforest who claim their ancestral homeland has been polluted by the oil industry. The film explores the influence of media support, the power of multinational corporations, the shifting power in Ecuadorian politics, and the rapidly disappearing indigenous cultures of the rainforest.

The screening will be followed by a faculty panel with representatives from the Law School and the Film Television and Theater Department, who will discuss the film as art that intersects with complex legal as well as environmental issues.

This event is co-sponsored by the Center for Civil and Human Rights, the Minor in Sustainability, and the Department of Romance Languages. 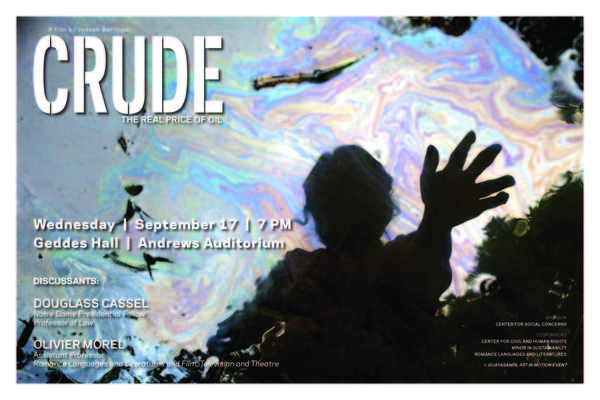 Back to Minor in Sustainability homepage