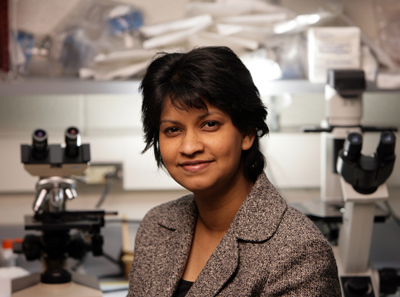 She received her Ph.D. in Biochemistry from the University of Texas Health Science Center at San Antonio. Prior to coming to Notre Dame, D’Souza-Schorey served as a postdoctoral research fellow and then a research assistant professor in the Department of Cell Biology at Washington University School of Medicine in St. Louis.

Her research, which has received significant support from the National Institutes of Health, the American Cancer Society, and the U.S. Department of Defense, involves understanding the cellular changes that lead to metastasis, the major life-threatening clinical manifestation of cancer. D’Souza-Schorey, who has won numerous awards for her work, serves as a scientific reviewer for several funding agencies and an editorial board member for several journals. She is an elected Fellow of the American Association for the Advancement of Science.