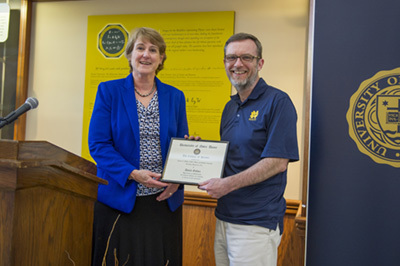 David Galvin, associate professor of mathematics, is the recipient of the 2016 Father James L. Shilts, C.S.C./Doris and Gene Leonard Teaching Award from the College of Science.  The award, which was conferred on May 13 at the College of Science awards luncheon, is presented for excellence in undergraduate or graduate teaching.

In nominations by the faculty and students of the college, faculty noted his many contributions to the educational mission of the college. He has taught courses for early mathematics majors, honors math majors, actuarial science minors, and graduate students in mathematics.  He has designed or redesigned a number of courses which have become popular math electives.  The course, Problem Solving in Mathematics, prepares students for participation in the annual Putnam Mathematical Competition, a national competition in which close to 5,000 undergraduate students across the country try to solve twelve challenging mathematical problems and in which the median score every year is 1 out of 100 possible points. Since Galvin has been instructing this course, enrollment has doubled; the number of students who participate in the competition has nearly doubled with more than 10 students scoring in double digits.  His students consistently say that “he understands the pace of learning,” and that he always strikes “the right balance of rigor and humor.”

This award, bestowed annually on a faculty member in the College of Science, is named in honor of Father James Shilts, C.S.C. who taught in the Department of Physics from 1961 until his death in 1982. The award was endowed in 1984 by Eugene T. Leonard, III in memory of his parents, Eugene and Doris Leonard. Leonard, III was a member of the Science Advisory Council from 1976 until 1991.  The award recognizes a faculty member who has demonstrated sustained excellence in teaching.

Galvin earned his Ph.D. in mathematics from Rutgers University. He was appointed assistant professor in the Department of Mathematics at Notre Dame in 2007 and was promoted to associate professor in 2013. His research interests lie in the areas of discrete probability, combinatorics and graph theory.