Greg Crawford, dean of the College of Science, hosted the annual Dean’s Award Luncheon on Friday, May 18, 2012 in the Jordan Hall of Science Galleria. Over 180 students, family members, faculty, and staff were in attendance to celebrate the achievements of the college’s top graduating seniors. 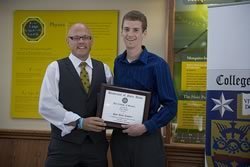 The Dean’s Award was established in 1980 and is presented to a graduating senior in recognition of exemplary personal character, leadership, service, and outstanding scholarship. This year, dean Crawford presented the award to two students, Paul Lambert and Jennifer Schulte.

Paul Lambert
Paul Lambert of Federal Way, Wash. graduated with a Bachelor of Science in biochemistry, with a minor in Science, Technology, and Values, and was a member of the Glynn Family Honors Program.  Since 2009, Lambert worked in Professor Amanda Hummon’s laboratory conducting research on colorectal cancer. His research resulted in two major projects and he recently published a paper in the journal Proteomics.
In addition to his science work, Lambert was a very active volunteer, working with the Early Childhood Development Center, the Right to Life Club and Habitat for Humanity.  Lambert will attend the University of Chicago Pritzker School of Medicine on a merit scholarship in the fall. 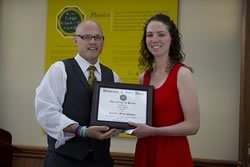 Jennifer Schulte of Burr Ridge, Ill. earned a Bachelor of Science degree with a double major in Science Preprofessional Studies and Anthropology.  Shulte was a very active volunteer throughout her college career, primarily working with health care related organizations.  She was a weekly volunteer at the Saint Joseph Regional Medical Center and regularly volunteered at the South Bend Juvenile Correctional Facility.  She also volunteered for the First Aid Services Team, which provides emergency first aid for large sporting events on campus. 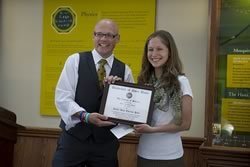 This year, dean Crawford presented the inaugural Dean’s Research Award.  This award is presented in recognition of exceptional research within and across the traditional boundaries of scholarly disciplines to a graduating senior who embraces, facilitates, and fosters an environment of scientific inquiry. This year’s award was presented to Nancy Paul.

Nancy Paul of Mercer, Pa.  graduated with a Bachelor of Science in Physics with a concentration in Advanced Physics, and was a member of the Glynn Family Honors Program.  She was the first undergraduate physics student to receive a National Science Foundation Graduate Research Fellowship, which she earned in April 2012.

Paul’s passion for research began early.  Before her freshman year, she contacted Professor Ani Aprahamian to inquire about undergraduate research opportunities in the Nuclear Science Laboratory and became a trained accelerator operator  during her freshman year. She also has international research experience and worked at the Grand Accélérateur National d'Ions Lourds (GANIL) in France last summer.  Her extensive research experience has resulted in four forthcoming publications.

In addition to her physics research, she served at the Co-Editor-in-Chief for Scientia, Notre Dame's undergraduate journal of scientific research. Paul will begin her graduate studies in physics at the University of Notre Dame this fall.

At the awards banquet, each of the College of Science departments recognize students for their outstanding scientific achievements throughout their college careers.

Department of Chemistry and Biochemsitry