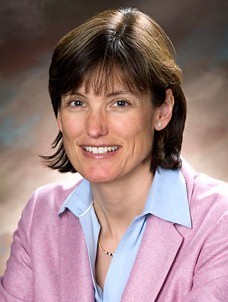 Ann Weber, executive director of medicinal chemistry at Merck Research Laboratories, described the design and synthesis of Januvia™ (generic: sitagliptin), a new treatment for type 2 diabetes at a lecture last Thursday (April 10)  in Nieuwland as part of the Organic Seminar series sponsored by the Department of Chemistry.

Weber, who was Notre Dame’s 1982 valedictorian, graduated with a bachelor’s degree in chemistry and  later earned a Ph.D. in organic chemistry at Harvard University. Marvin Miller, the George and Winifred Clark Chair in Chemistry, called the talk “a mini course in medicinal chemistry.”

Weber led a team of chemists and scientists at Merck who synthesized a drug that inhibits the action of the enzyme dipeptidyl peptidase IV (DPP-4). That improves glucose tolerance because it increases circulation of hormones that bring about more secretion of insulin and prevent more release of glucagon, which works against insulin.

The FDA approved the drug in October 2006 and approved a combination sitagliptin and metformin called Janumet™ in April 2007.

The drug is especially important because of a worldwide increase in cases of type 2 diabetes, also known as late-onset diabetes, that is often linked to obesity. Experts expect 366 million cases of diabetes by 2030, up from 171 million in 2000. More than 90 percent of the cases are type 2.

High glucose results from insufficient use of the sugar by the muscles, defective insulin production in the pancreas, or overproduction of glucose in the liver. Other treatments attack the problem by stimulating the pancreas to make more insulin or helping the muscles take up the glucose, but they have extensive side effects and limited effectiveness.

“None of these work long-term,” Weber said. Sitagliptin also avoids such side effects as weight gain and hypoglycemia that some other diabetes drugs, such as Glipizide, can bring.

The process of developing the drug started with the hypothesis that inhibiting DPP-4 would reduce glucose levels and proceeded along parallel lines as researchers tried various chemicals.

Early tests with an inhibitor of DPP-4 turned out to interfere with other chemicals related to DPP-4, proving fatal to dogs in the fifth week of an experiment.

Merck wanted to develop a drug that would deal with DPP-4 without affecting the related chemicals enough to be toxic. The drug also needed to be available in pill form for patients to take orally, once or twice a day. (Januvia™ requires only one dose a day.)

Researchers found ways to make a more selective drug, affecting DPP-4 and not the others, but early versions were not sufficiently stable to work in the body for long periods. One line was dropped when they discovered that it blocked an important ion channel.

“You try to do as much stuff in parallel and get as much data as you can,” Weber said.

The researchers, using structure-activity relationship (SAR) studies, were able to develop a series of inhibitors from certain amino acids and develop the compound into sitagliptin.

Process chemists simplified the process and, using inexpensive raw materials, made more than one metric ton in the first year.

Studies submitted to the FDA showed significant effects of two different doses of sitagliptin compared to a placebo.

Merck’s studies showing improvement in islet morphology suggest that the treatment might slow the process of the disease.

“We are really touting the safety of this drug,” Weber said.

The drug is approved in more than 50 countries, including the United States and members of the European Union. Last year, the first full year of sales, the drug earned $750 million, and it is projected to earn $1 billion his year. Total costs of bringing the drug to market amount to nearly $1 billion.

In addition to her leadership in this project, Weber is co-inventor on 23 US patents (with 14 pending) and is author or co-author on more than 55 publications.

Her research team last year won the Prix Galien USA award for their work on Januvia™, and she received the Merck Director’s Award and the Thomas Alva Edison Patent Award. In 2006, she was named a Merck “Most Amazing Woman.”