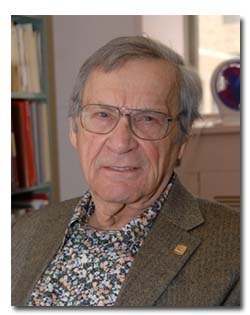 Early in his career at the University of Notre Dame, around 1960, Walter Johnson took students at night to Bendix Corp. to do calculations on the manufacturer’s computer that could do 15 multiplications a second–15 times as many as the University’s computer.

“When they weren’t using their computer, they let us use it,” recalled Johnson, an atomic physicist. “The emphasis was to try to do things that people normally would do with pencil and paper, but you can’t get far that way. That’s been kind of the story of my research. During the time I’ve been working in this area, there has been this incredible development of computers.”

Johnson, 79, has been a world leader in the use of computers to solve complex problems, bringing the technology together with mathematics and physics. Leading physicists gathered at Notre Dame from around the world April 4-5 to toast his half-century with a symposium on atomic physics.

“He made quite a contribution to atomic physics,” said Victor Flambaum, who met Johnson in Russia in the 1980s and came from Sydney, Australia, for the event. “We were working in the same field. He is an outstanding physicist and an outstanding person.”

Johnson, who attended the University of Michigan on the G.I. Bill after World War II, earned his undergraduate and graduate degrees there, where he was the last student of Otto Laporte, discoverer of the Laporte Rule.

He was chairman of Notre Dame’s Physics Department from 1982 to 1985, although he was in Germany on the Alexander von Humboldt Senior U.S. Scientist Award for one of those years and happily returned to his research focus, which includes photo-ionization and relativistic many-body perturbation theory among other things.

“He was a very distinguished atomic physicist,” said Alex Dalgarno, who worked with Johnson when Johnson had a sabbatical at Harvard in 1975-1976, a turning point in his research career.

Johnson has advised 21 doctoral students, taught some 10,000 undergraduates, written a book on atomic structure theory, and authored or coauthored 250 published papers, including six already this year.

In his spare time, he once rode a bicycle from California to South Bend, and he helped the sheriff of St. Joseph County, along with some other Notre Dame professors, investigate reports of poltergeist activity in a nearby town.

Tom Wilkerson, from the Space Dynamics Lab in Utah, has known Johnson since his days as a graduate student at the University of Michigan.

“For the rest of us students, he was an excellent mentor and teacher,” Wilkerson said. “He was a generous, supportive person.”

K.T. Cheng from Lawrence Livermore Laboratory, a student of Johnson in the mid-1970s, remembers a day trip to use a computer at Purdue University because the problem was more complex than Notre Dame’s equipment could handle.

“Our problem required a different computer,” Cheng said, recalling Johnson’s swilling Maalox as the card reader failed to work at first. “There is nothing like a direct check. He would go anywhere to make sure our result is correct.”

Johnson’s fifty years of teaching and research at the University of Notre Dame have left a legacy. Students, post docs and colleagues around the world will continue to appreciate his wisdom and guidance.